As I write this, the world is facing an unprecedented global pandemic and I’ve personally been stuck at home for most of the past 90 days. I decided to clean out my notes earlier this week (don’t judge, I’m running out of things to do) and came across a note I was using to keep track of my trip to Germany late last year. It was meant to turn into a blog post at some point and since I really miss traveling, this is a good time as any to relive those precious memories.

For some context, this was my first time traveling solo (ignoring some shorter weekend excursions) and came at a time when I was on a binge of “personal growth”. My other growth hacks during this period include starting drum lessons, finally making a dent on my growing shelf of unread books and attempting regular meditation. While history, food and German beer were definitely significant factors in my decision to make this trip, I was also determined to challenge my anxiety by spending two weeks alone (for the most part) in a foreign country.

I started my travels in Munich, a city famous for its architecture, culture and of course, Oktoberfest. While I had missed the actual festival by a month, the city did not fail to deliver the best beers and lively company of strangers that Oktoberfest is so popular for!

After a (relatively comfortable) 13 hour flight from Singapore, I was greeted by a freezing early morning in the Bavarian capital. As someone who has spent their entire life in the tropics, I’m definitely not used to 5°C weather but welcome it wholeheartedly, albeit for short spans of time. I got sorted out at the airport (SIM card, Euros, jacket) and hopped on a S-Bahn to the city to begin my trip. Since my Airbnb check-in was not for another eight hours, I left my luggage at the central train station’s lockers and headed to Munich Residenz for an early morning stroll. 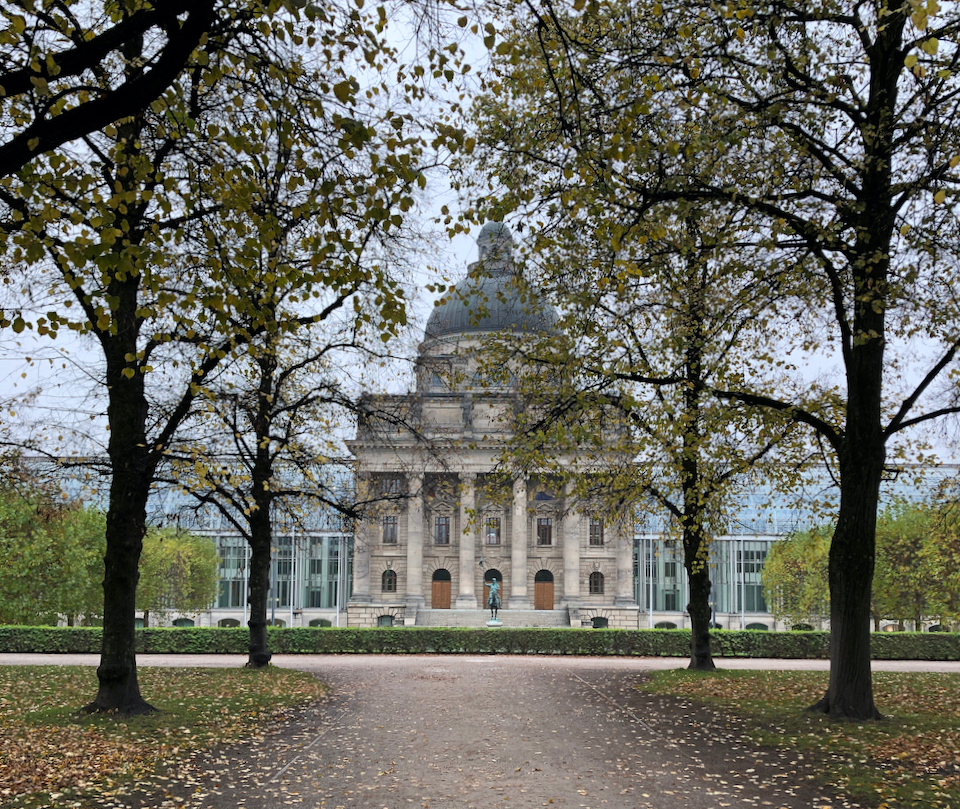 This was my first time experiencing autumn and I immediately fell in love with the foliage (a common theme for the rest of my trip). The chilly breeze and fall colors of the empty park around Munich Residenz were a great cure for my jet lag and I spent a lot of time mindlessly wandering around (much to the envy of other people in the park rushing to work).

Following a quick breakfast at a nearby coffee shop, I headed to Marienplatz for a (free!) walking tour by SANDEMANs. The walking tour lasted a couple hours and our guide, Brett, was very entertaining, knowledgeable and unbelievably funny. As part of the tour, we visited the Frauenkirche, caught the world-famous Rathaus-Glockenspiel and warmed up in the lobby of the legendary Hofbräuhaus beer hall. Interestingly enough, I ended up having my first beer in Germany from a kebab shop across the street from Hofbräuhaus and was delighted at the lack of judgment for doing so before noon. 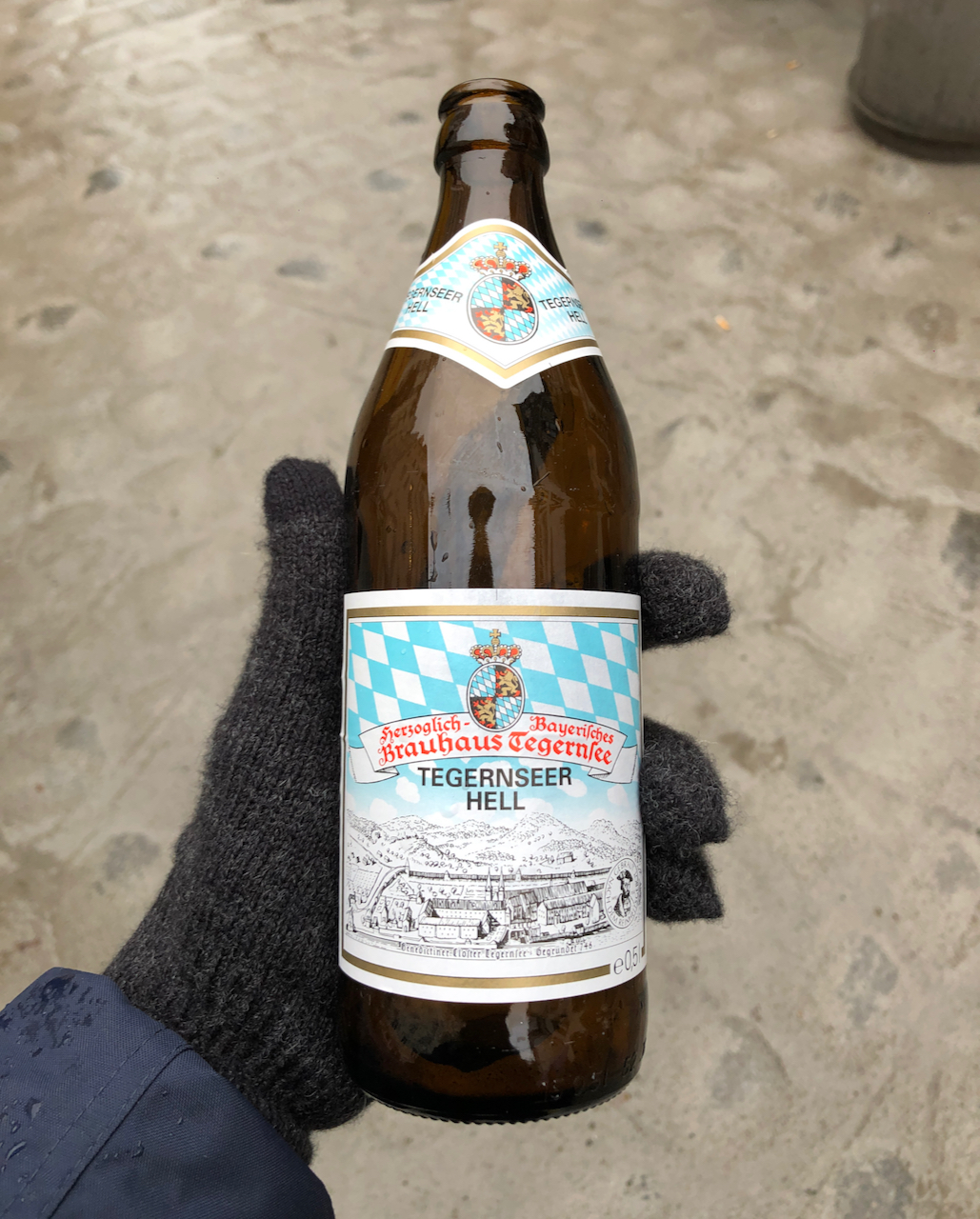 My first beer in Germany!

For the rest of my first day, I hung out with Greg, a friend I made during the walking tour who also joined me for the pre-noon kebab shop beer! We ate authentic Bavarian food at Schneider Brauhaus München, climbed to the top of St. Peter’s Church and roamed around the old town exchanging stories about growing up in Indonesia and Brazil respectively. Overall, a fantastic start to the trip! 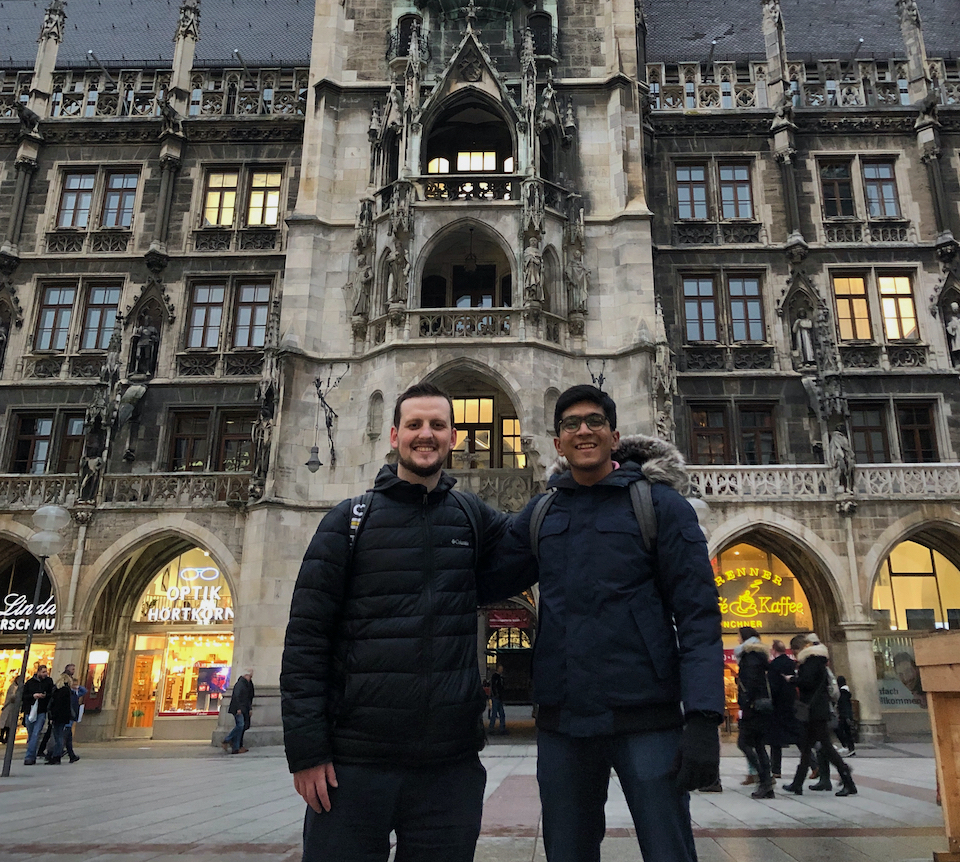 My second day in Germany started early with a day trip to Nuremberg, offered by these fine folks. We spent the first half exploring the medieval town and learning its rich pre-WWII history and dove into WWII in the latter half as we veered into the nearby Nazi rally grounds. Josh, our guide, was a great storyteller and engaged us in deep discussions about the rise and fall of Nazism (as well as parallels in the modern world). 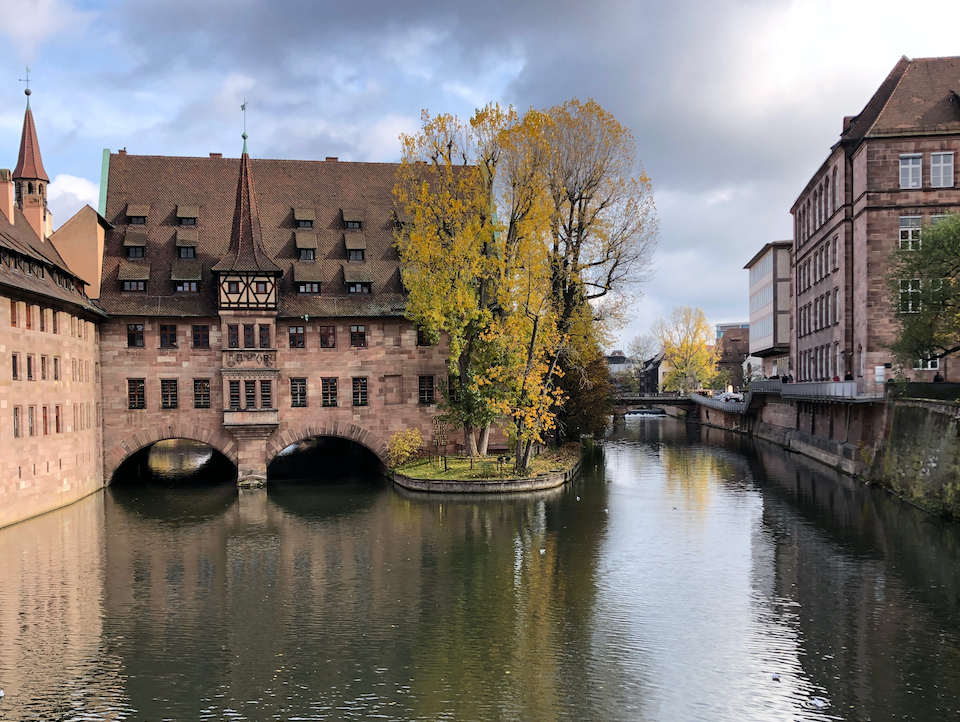 This was also a day of gluttony as I ate the legendary €3 sausages from Bratwursthäusle bei St. Sebald in Nuremberg and treated myself to a delicious candle-lit Greek dinner (complemented with German beer) at Taverna Cyclades back in Munich. 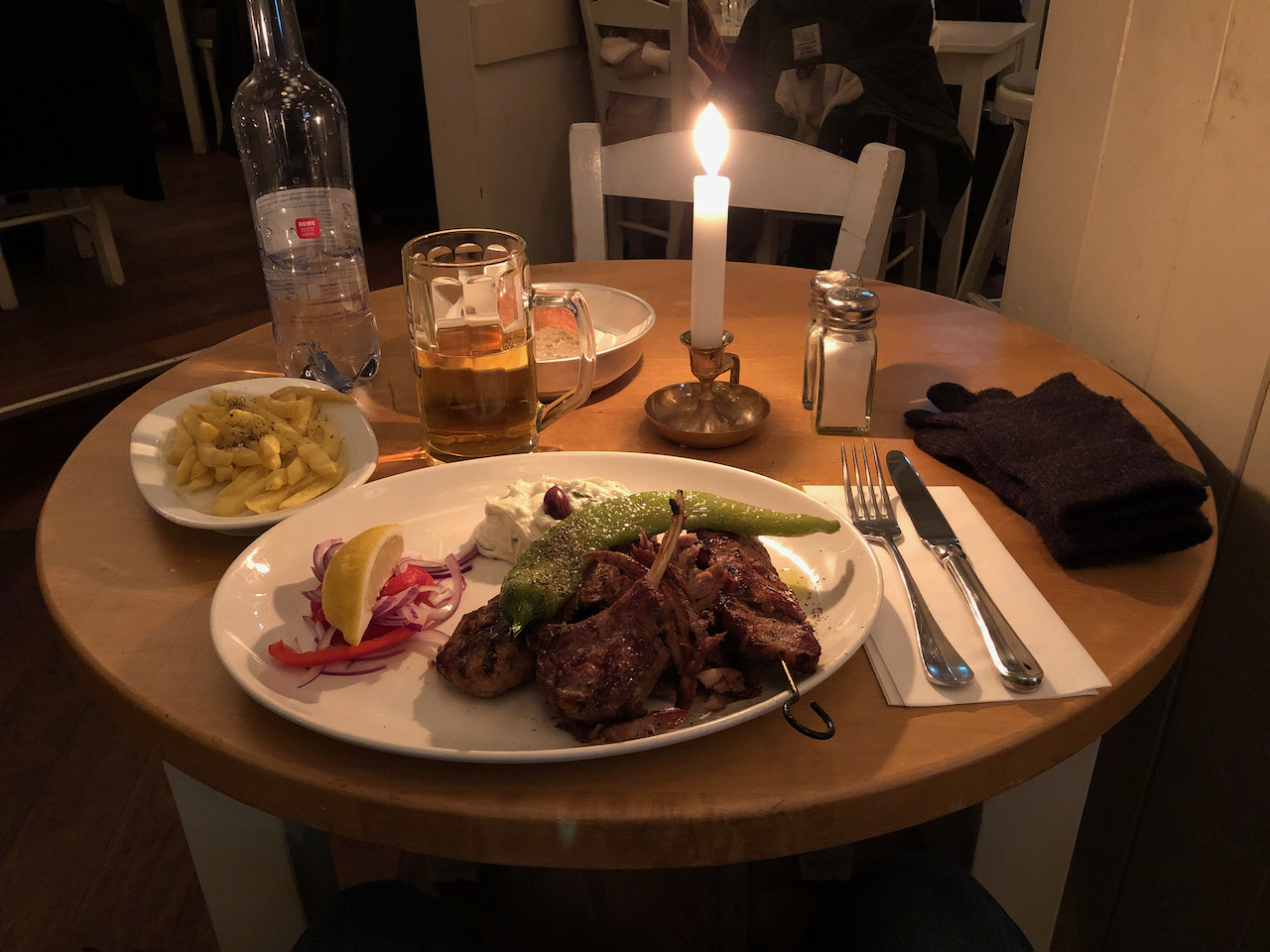 The next day was the peak of my brief (but intense) romance with autumn as I headed to Nymphenburg Palace in the early hours of the day to explore the surrounding park. With more than a couple hot chocolates in me, I aimlessly strolled around the park for a few hours as swans, ducks & the occasional jogger piqued my interest from time to time. I took endless photos of the rolling fog, trees, paths and lakes in an attempt to capture the scenes forever. There’s also a voice note on my phone where you can hear a stream run through the park as birds chirp overhead! 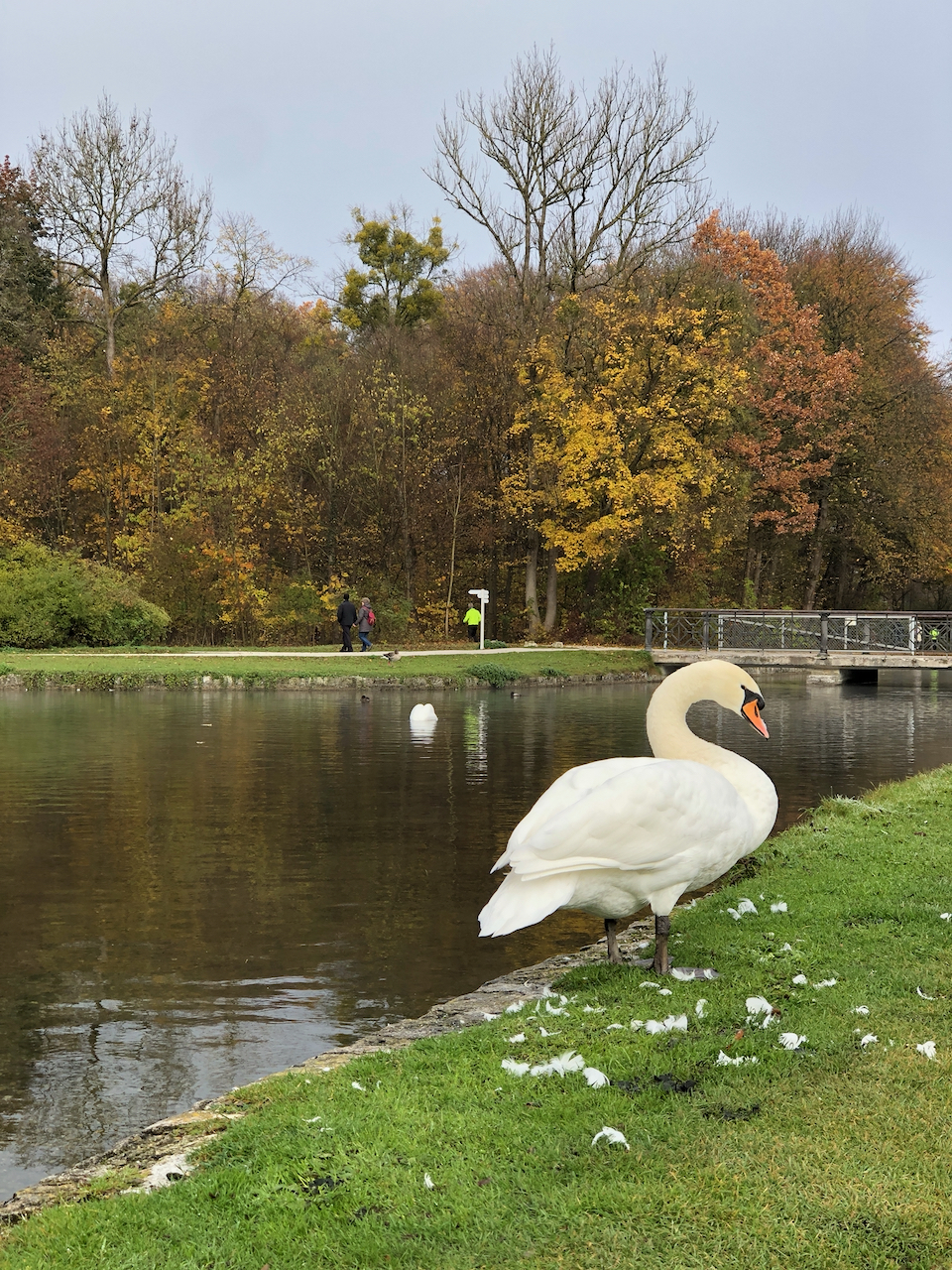 After a quick stop at Deutsches Museum (whose computer history section I highly recommend) later in the day, I made my way to the renowned Hofbräuhaus for dinner and a couple pints. While I didn’t plan on staying for too long, I was lucky enough to share a table with a bunch of other solo travelers and we spent the night reveling, drinking great beer, munching on pretzels and exchanging tales over Google Translate! Luca, I hope to visit you in Italy soon to try your homebrewed beer!

My last day in Munich was mostly spent nursing my hangover in the English Garden, one of the largest urban parks in the world (where I was constantly losing my way). I mean, who wouldn’t feel better after a couple hours of views like these! 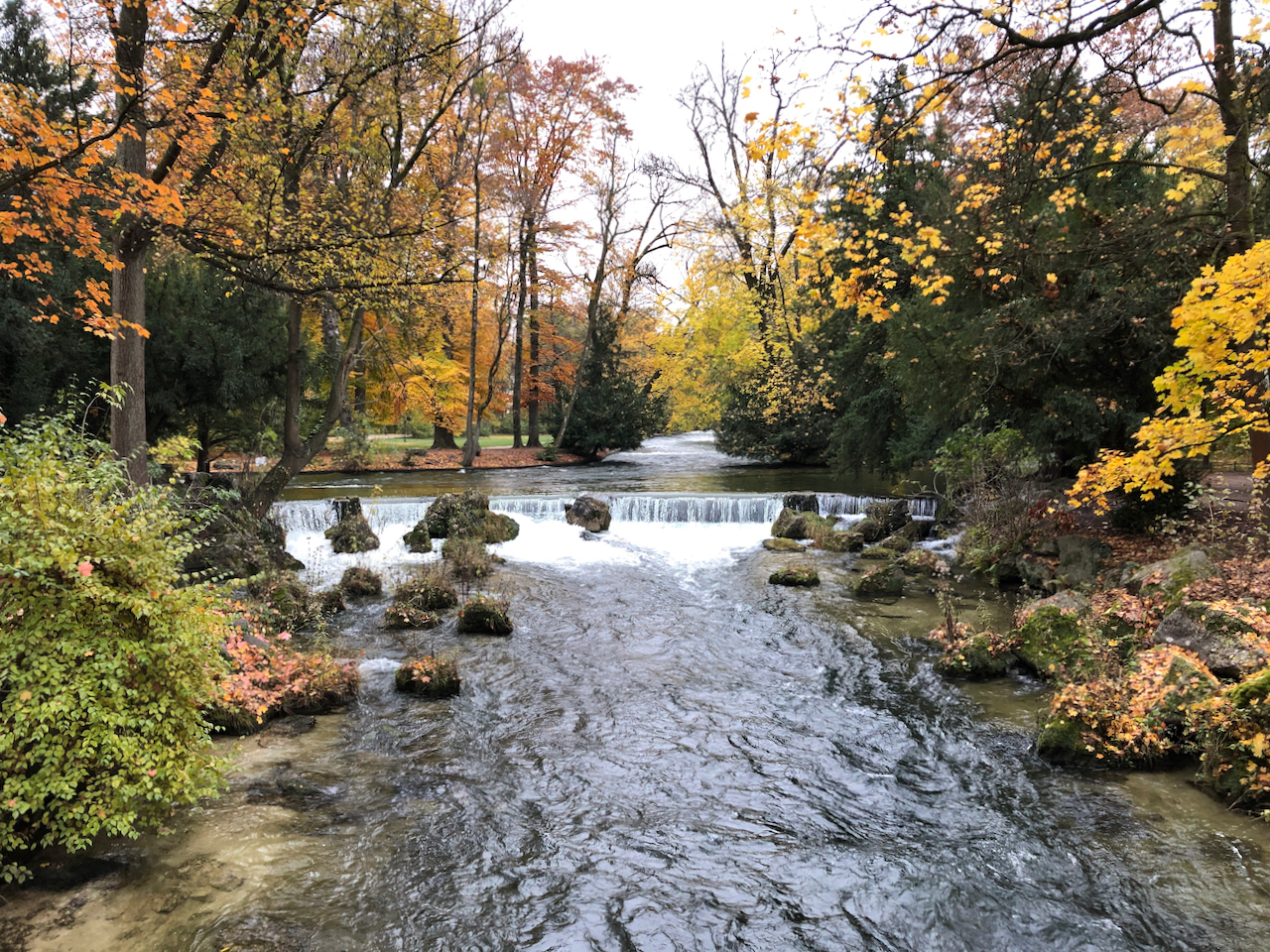 For the next leg of my trip, I jumped on a high-speed DB train (we hit 280km/h during our ride!) to Berlin, the city I was most looking forward to! The ~4 hour ride was a great opportunity to catch up on some reading (as well as some well-deserved sleep). As I pulled into the train station, I texted Saurya, a friend who would be joining me for the Berlin leg, to meet me at Alexanderplatz.

After a couple delicious street-side sausages, we headed to the top of Berliner Fernsehturm (or Berlin TV Tower) for a view of the Berlin skyline at night. The view was less than impressive but the overpriced beers at the bar made it slightly more palatable. We followed that up with a quick stop at Brandenburg Gate and a traditional Bavarian dinner at Gaffel Haus. 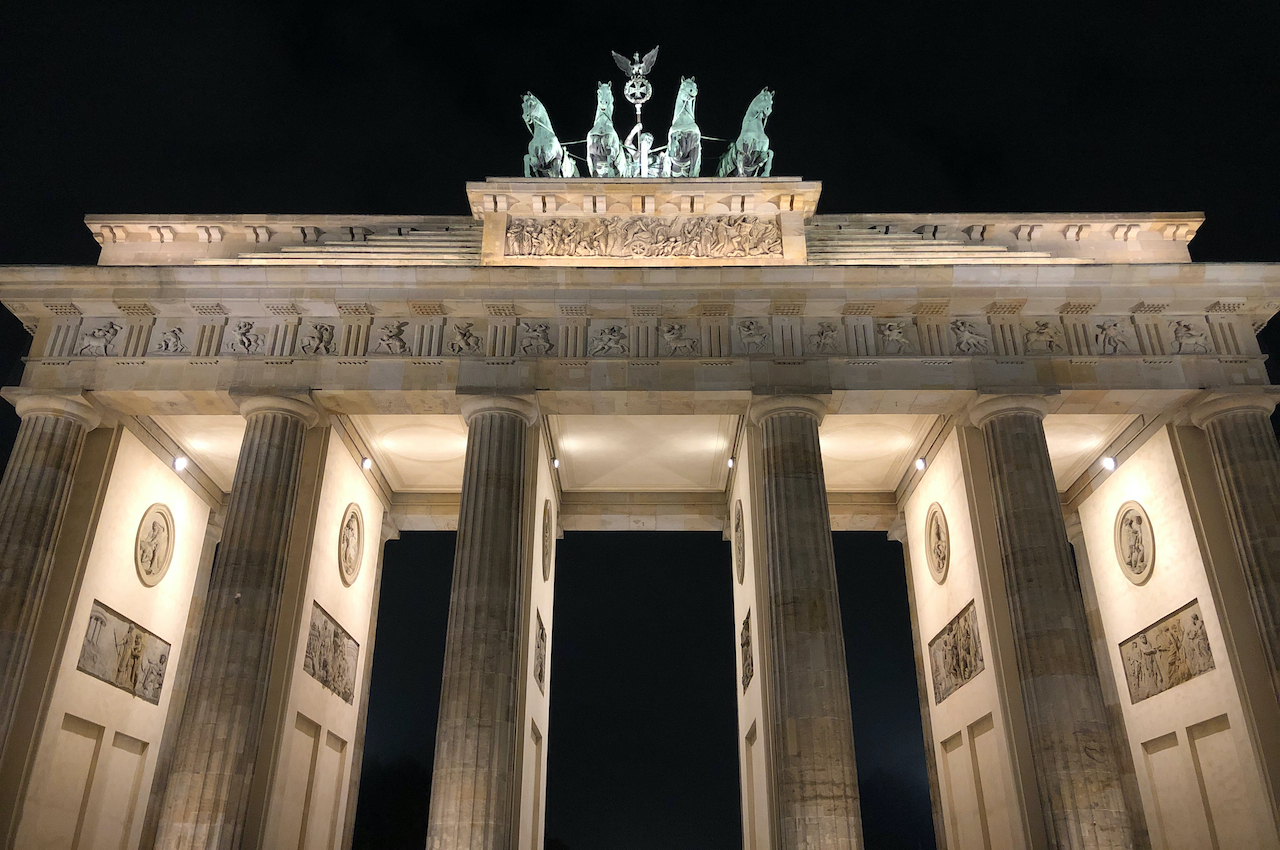 The next day, we grabbed a couple hot chocolates from The Barn (this became our daily rendezvous point as well as morning coffee joint) and headed back to the Brandenburg Gate to explore the surrounding area. We took a closer look at the Brandenburg Gate, visited the Reichstag Building and paid our respects at the Memorial to the Murdered Jews of Europe. We spotted a SANDEMANs walking tour taking place and since I had a great time with the Munich version, Saurya and I decided to join the one here too. Again, the tour was really well done and Saurya’s history tidbits throughout definitely added to the experience!

Post the walking tour and quick visits to Bebelplatz and the Berlin Cathedral (whose rooftop has a great view), we ended the day with the SANDEMANs pub crawl. This led to an incredibly fun night involving a lot of new friends, kebabs, beer, group singing and dancing to Mundian To Bach Ke at the final spot of the pub crawl - Club Matrix!

As you would expect, I began the next day later than usual and visited Bellevue Palace & Victory Column before roaming around Tiergarten (to continue my fling with autumn). Finding out the German Spy Museum ends their exhibit with the infamous quote from Eric Schmidt about privacy was slightly disillusioning but our Georgian feast at Kin Za more than made up for it!

No trip to Berlin is complete without a visit to the East Side Gallery and the street art truly lived up to the hype. After clicking photographs for our upcoming boy band’s album cover, Saurya and I headed to the Jewish Museum for a more somber evening. I highly recommend the haunting Holocaust Tower here, which brought back memories of my deeply moving trip to Auschwitz a couple years ago. 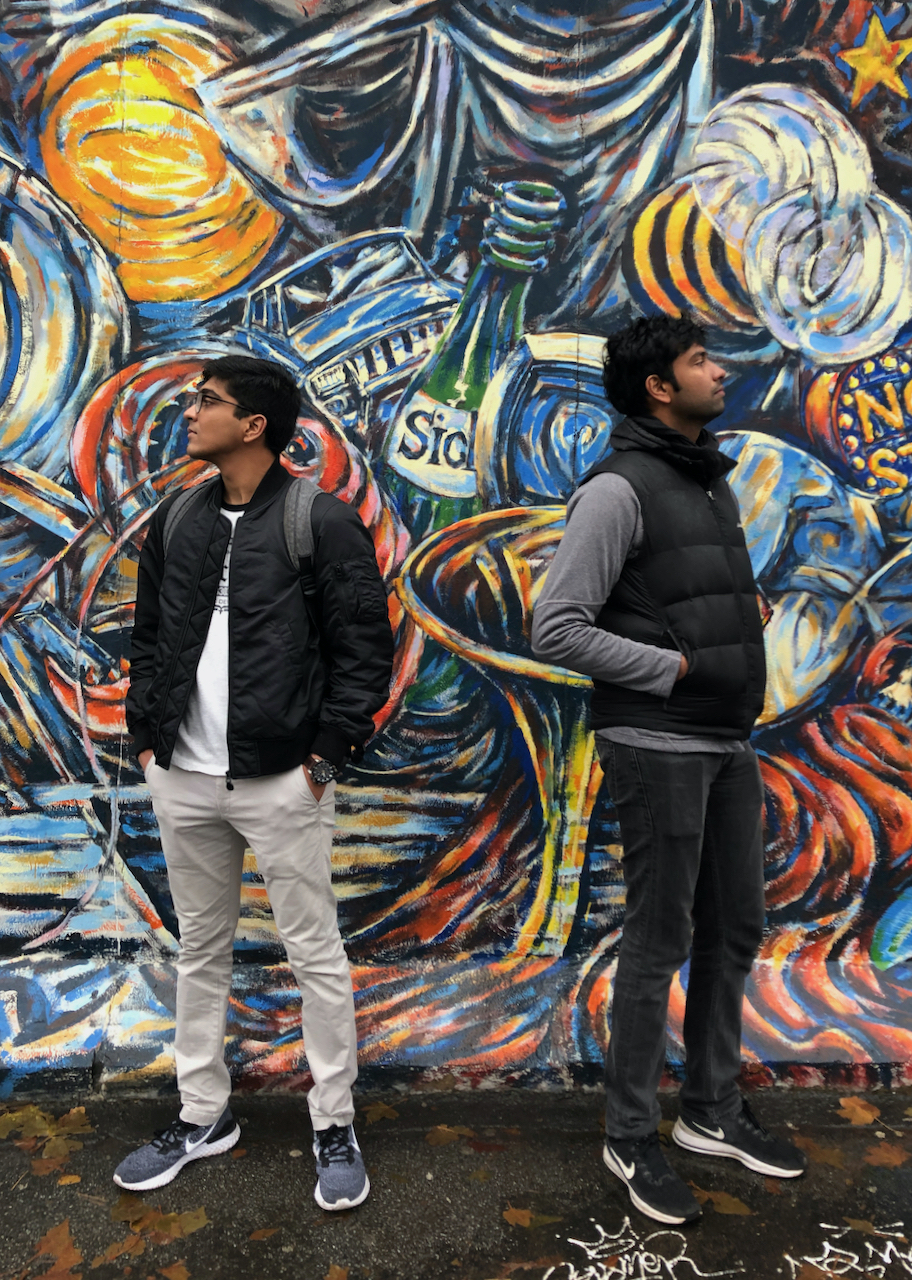 Our last day in Berlin started off at Charlottenburg Palace and its surrounding grounds, where we met several sheep, ducks & swans. There were also several people playing fetch with their dogs (a rare sight in Singapore) and it was great to take a minute to pause and appreciate our surroundings. We ended the day at the Berlin Wall Memorial, which was a great way to learn about the impact of the wall on people’s lives as well as the numerous escape attempts of East Berliners.

In every trip, there is always one transit experience that doesn’t go according to plan. For me, it was my transit to Heidelberg when my second train (from Frankfurt to Heidelberg) got unexpectedly canceled. Fortunately, since I had a day ticket (and managed to speak to some friendly locals), I was able to hop onto a couple different trains with my luggage and make it to Heidelberg in time for dinner and more importantly, rest.

Heidelberg is not on every German itinerary but I definitely suggest making a quick stop here, especially if your flight connection is from/to nearby Frankfurt. You only need a day to explore the old town area, which is the main attraction, and it’ll definitely make you feel like you’ve traveled back in time (if you can ignore the luxury stores that now occupy these well-preserved medieval buildings).

I started the day by walking along Philosopher’s Walk, an extremely serene path with a gorgeous view of the old town and the Heidelberg Castle across the river. After crossing the Old Bridge into town, I spent the rest of the day wandering the cobblestone-laden streets & alleys of this quaint little time capsule. I think I started missing home a little at this point because I ended up eating lunch at Hans im Glück, a German burger chain popular in Singapore, before heading to Frankfurt.

After 14 days of traveling, I was definitely exhausted and the 4 PM sunsets were not helping with my mood. I think that’s why I ended up spending a good chunk of my time in Frankfurt reading at my Airbnb or nearby riverside cafes. Nevertheless, I managed to hit the major attractions - Römerberg, Eiserner Steg, Frankfurt Cathedral, Paulsplatz, Commerzbank Tower - and gorge on German food & beer one last time. I was also happy to carve out a couple hours to grab a hot chocolate and stroll along the autumn trees in Grüneburgpark before saying my final goodbyes and boarding the Singapore-bound A380! 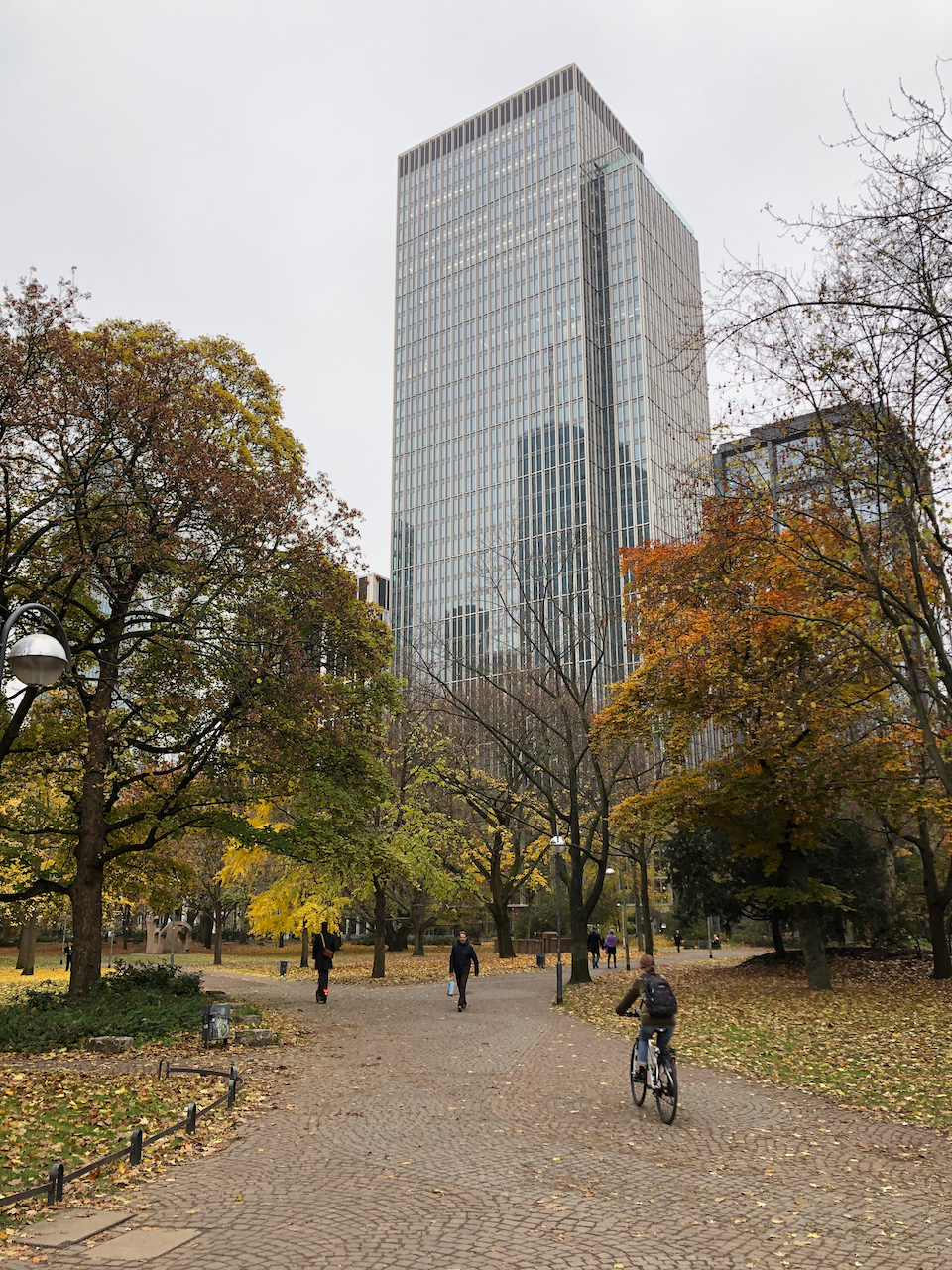