I really enjoyed writing about my trip to Germany a couple days ago and since I find myself missing traveling again today, I thought I’d take some time to reflect upon another fun adventure from last year. In August 2019, my parents and I spent a week detached from the rest of the world (due to the remote nature of these islands) in the highly underrated tranquility of East Nusa Tenggara, Indonesia. The trip was divided into two segments — three days on a boat exploring the Komodo National Park followed by a four-day road trip across the island of Flores.

After an early morning flight from Jakarta to Labuan Bajo (with one of the most gorgeous landings), we were jettisoned onto a repurposed fishing vessel that would be our home for the next few days. The guide and crew of four introduced themselves to us and we set sail for our first destination. On the way there, we realized just how untouched this part of Indonesia truly was. The sky was clear, the ocean sparkled blue and there was not a single piece of floating plastic! Could this be how Bali used to be before the tourism boom? 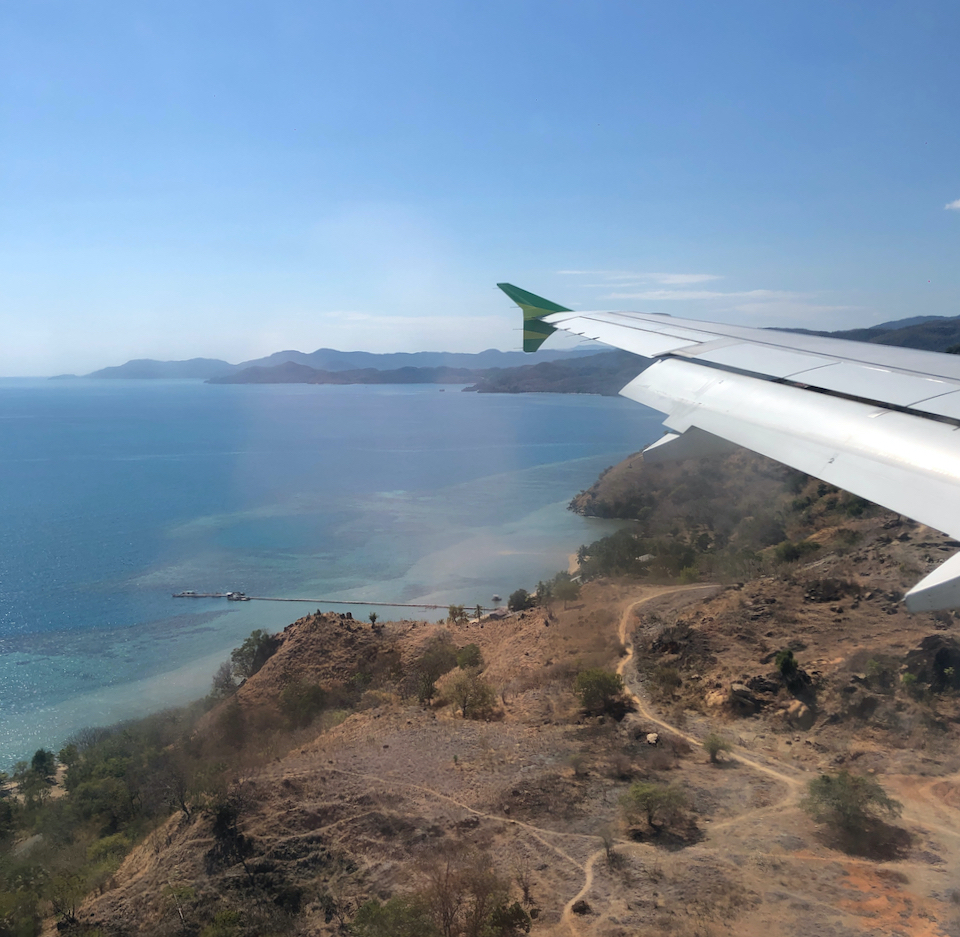 Our first stop was Kelor Island, where we were greeted by a lavish white sand beach and the challenge of hiking up a very slippery slope to the top of a hill on the center of the island. The climb was our first taste of adventure on this trip as the loose gravel fell apart beneath our shoes and we struggled to find our footing without any guardrails. Once we reached the top, little did we know the climb down was going to be even harder. I spent most of it sliding down on my posterior! 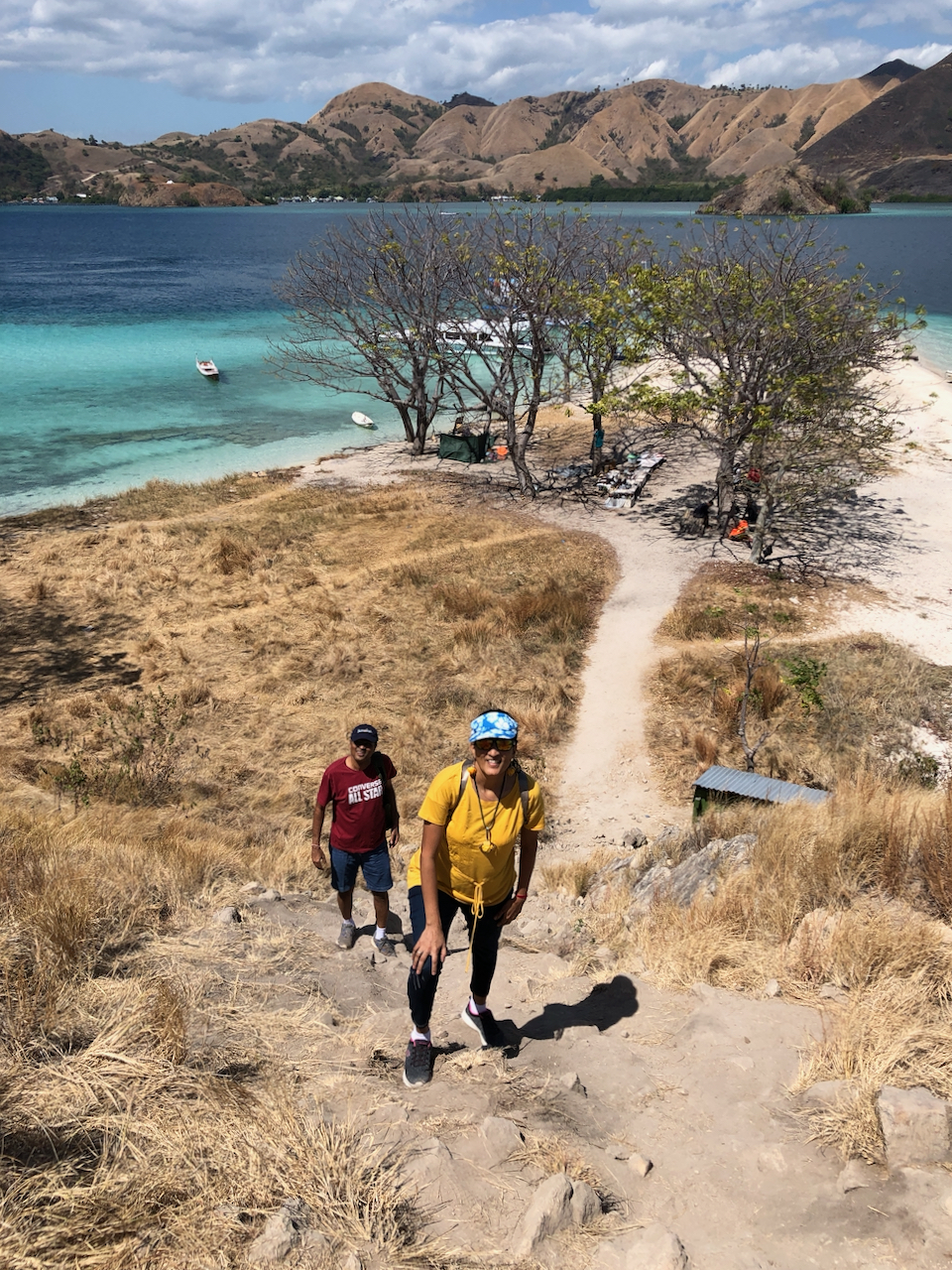 Snapped a photo of my parents on our hike up!

After lunch on the boat (and a quick dip in the ocean), we made our way to the famed Komodo Island to look for the man-eating dragons the national park gets its name from. These beasts of the past can only be found in this part of the world and are one of the most savage creatures on the planet. They are venomous, cannibalistic (some even eat their own children!) apex predators who have nothing to fear and roam free on these islands, which are largely uninhabited by humans.

While we were accompanied by a ranger at all times, his primary weapon of choice - a long stick that branched into two at one end for jabbing the eyes of the dragon - did not instill a lot of confidence. Due to August being mating season, most of the Komodo dragons had made their way deeper into the jungle and we were sadly unable to spot a lot of them in the designated trekking area. However, we did see a few younger ones scampering about and also caught a couple adult dragons lurking around the ranger village looking for scraps. There were also several monkeys, wild boars and deer on the island too! 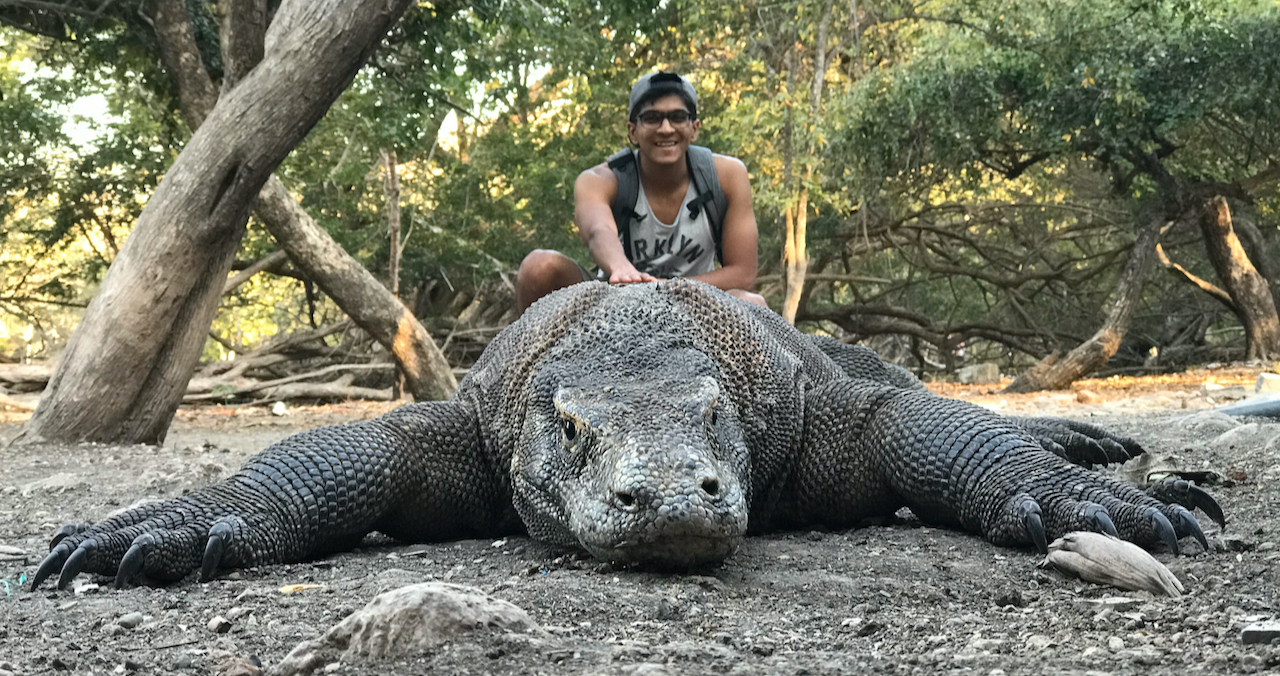 After watching the sun set over the hills of the island, we spent the night on the boat. An unexpected (but welcome) surprise was the immensely starry night that blanketed the open sky as I tried to spot any constellations I could recognize. Unfortunately, I wasn’t carrying the right gear to capture this beautiful sight but it will forever be etched in my city-dwelling mind.

We started the following day bright and early to hike up Padar Island and watch the sunrise atop the Instagram-famous lagoon trio. After a photo session that lasted longer than I’d like to admit, we made our way down and to the next activity - snorkeling! While the plan was to swim alongside turtles and manta rays, they’re both extremely shy creatures and it was hard to get a hold of them without being overly intrusive. So, we decided to just stick to the coral reefs around us and watch schools of fish swim around in the crystal clear water. 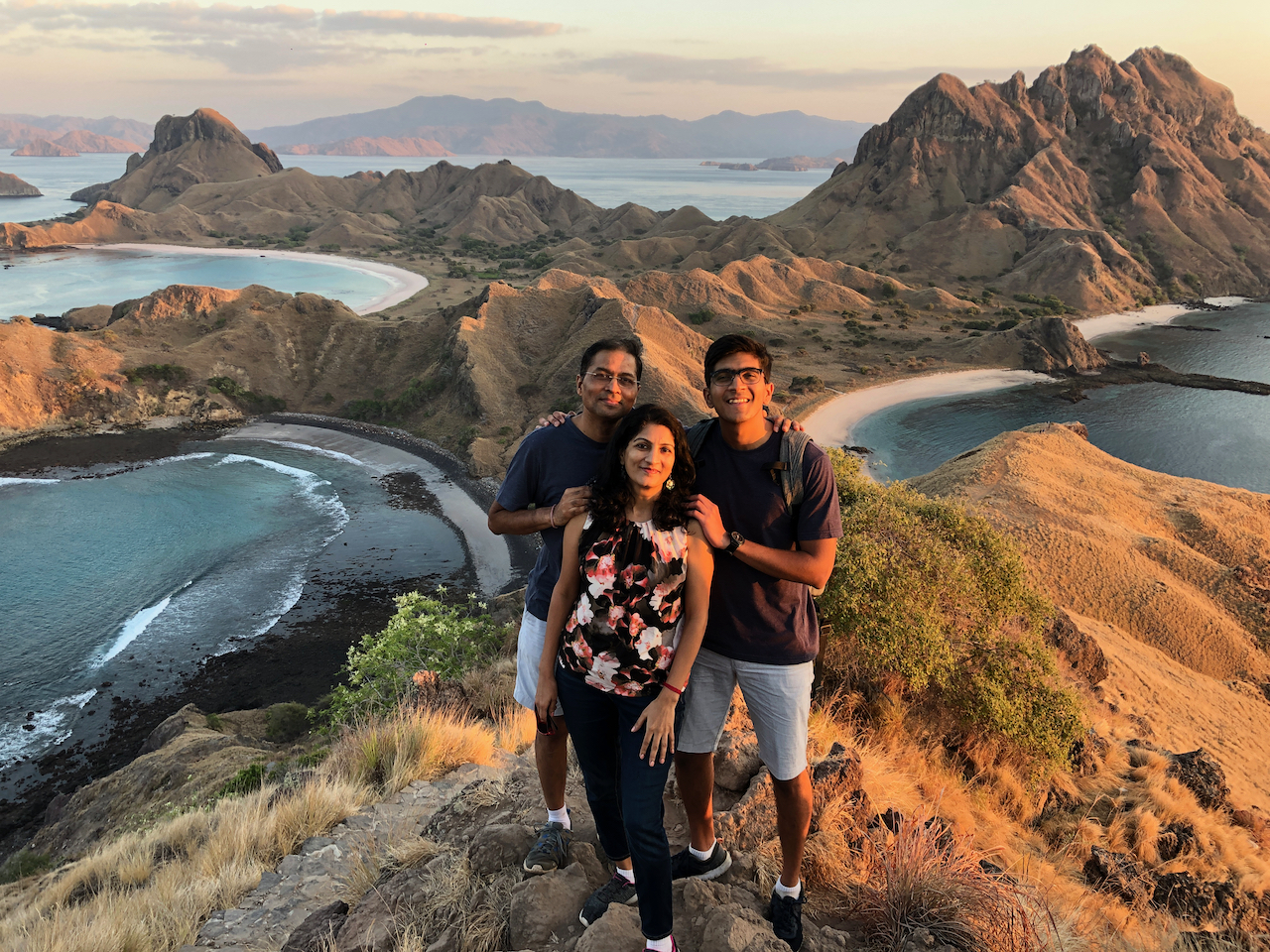 The next few hours were spent relaxing at a nearby pink sand beach before heading back to Komodo Island to try our luck with the dragons again. We weren’t able to spot any adults this time either but did spot a younger one jumping down from a tree (where they live to protect themselves from older dragons) and running across the beach!

The subsequent day was our last day on the boat and the only agenda was to swim at different snorkeling spots in the national park. At one point during my afternoon laze on the deck, I noticed a couple wild dolphins swimming alongside our boat! In the evening, we watched thousands of flying foxes fly out from their island to several others as the sun set. This daily phenomenon was a sight to behold as the nocturnal creatures dotted the sky in search of food. 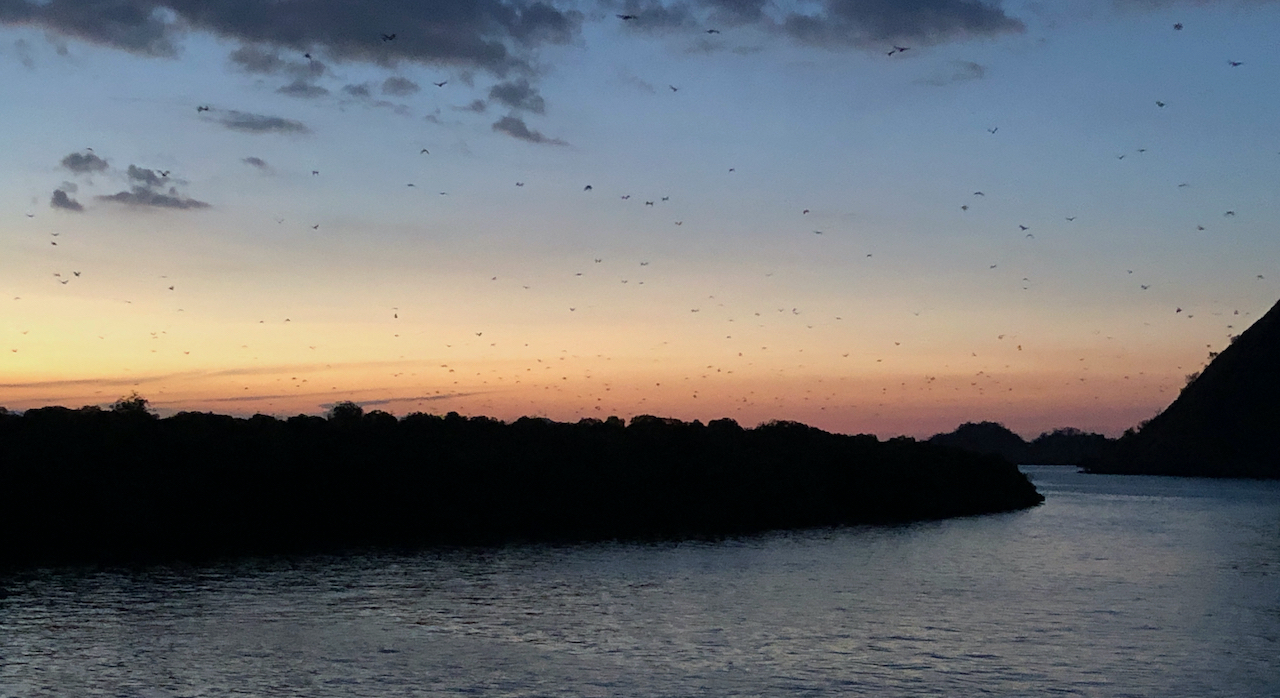 After an overnight pit stop at Labuan Bajo, we set off for the next half of our adventure — a road trip across the island of Flores. The island is not usually part of first-time itineraries to Indonesia and because of its relative obscurity, it provides a glimpse into the more traditional side of the country. The first day was spent driving across endless rice fields (as well as spiderweb-shaped ones in Ruteng) towards a live archaeological site where they initially discovered Homo floresiensis. This was especially interesting for me as I observed the international team of scientists sift through the dirt and label each piece of evidence with extreme care. 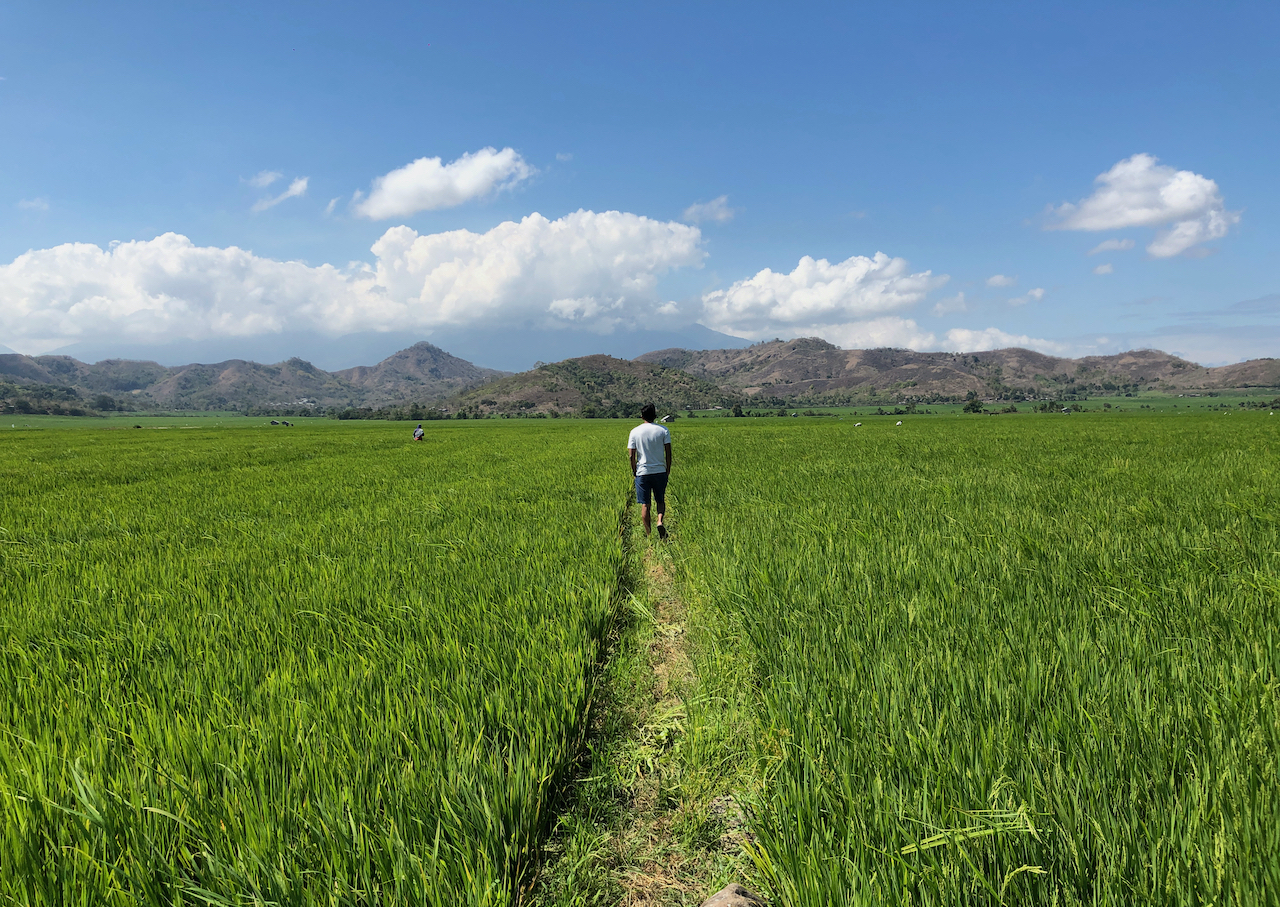 I wasn't kidding when I said endless rice fields

We spent the night at a lodge in Ruteng before heading further east the next day. On our way, we stopped by a traditional village (where we were kindly invited into the home of the village elder) and explored a large lake and its surrounding jungles. After lunch, we visited a local arrack distillery and tasted some of the traditional (and extremely strong) coconut liquor before relaxing at natural hot springs close by. 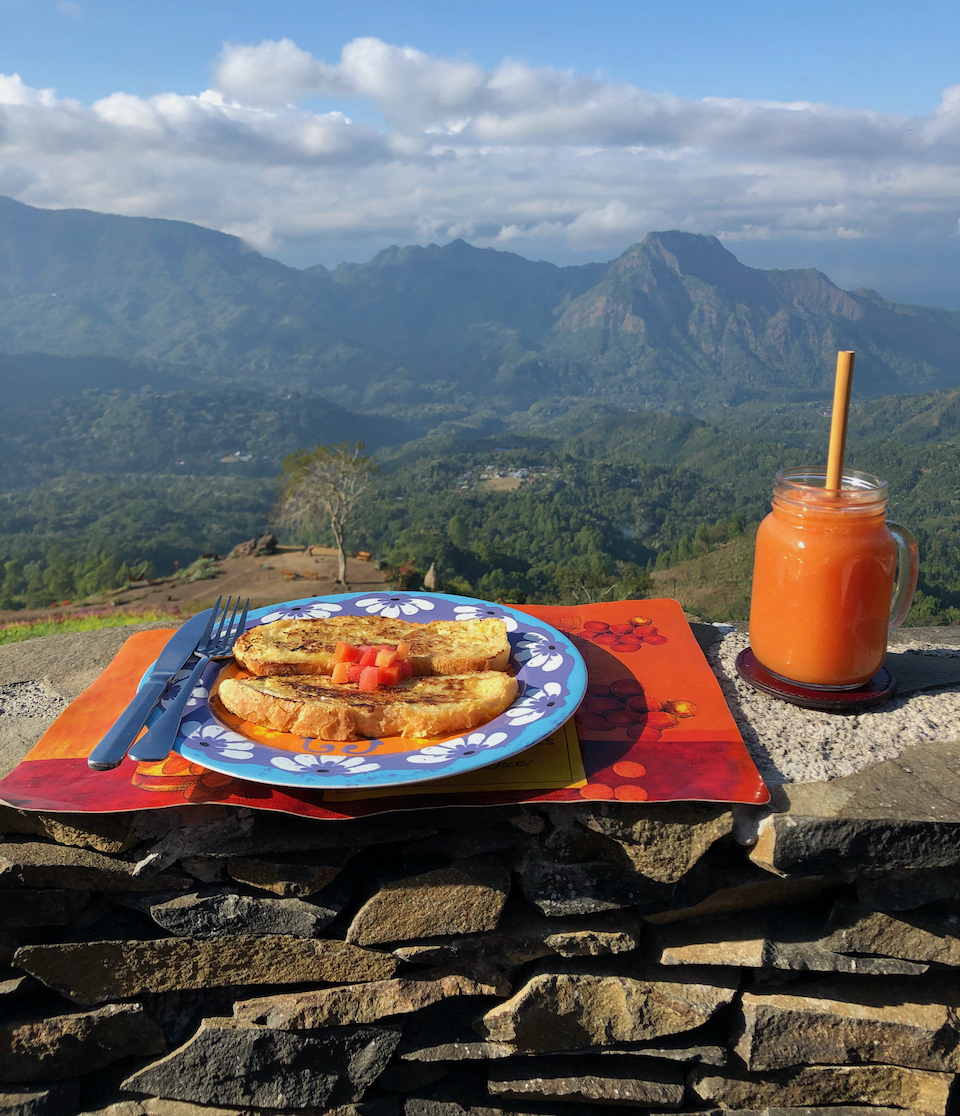 Breakfast with a view!

After a night of well-deserved rest (who knew sitting in a car all day would be this exhausting?), we spent the day exploring another traditional village, where we were welcomed by friendly locals and even friendlier cats! After a drive across some rice terraces, we found ourselves at Blue Stone Beach in Ende known for its turquoise pebbles that fall from the cliffs nearby. After a delicious Indonesian meal at a beach shack, we drove for the rest of the day to our overnight lodging at the base of Mt. Kelimutu. 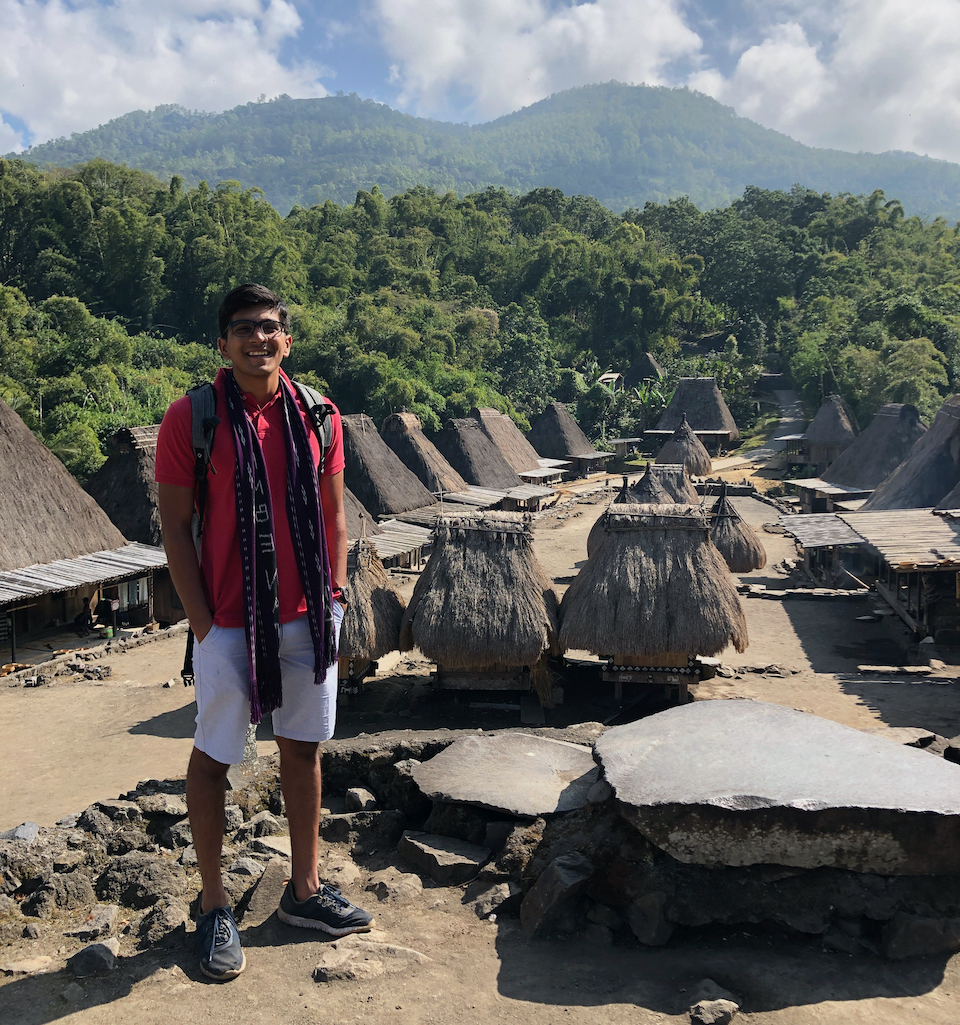 The highlight of our last day in Flores was hiking up Mt. Kelimutu in pitch black using nothing but flashlights to watch the sun rise over the three lakes at the top of the volcano. It was an extremely picturesque scene that made the early morning alarm and hike very worth it! I highly recommend spending some time on top in order to avoid the crowds on your way down since the hiking path is equally serene (which you miss in the darkness on your way up).

After a quick visit to another traditional village nearby, we hopped onto a twin-rotor plane back to Labuan Bajo from the local airport (which only opened for certain hours in the day when an airplane was due to take-off / land) and caught a flight back home from Komodo Airport the next day.