The last few months have been a complete whirlwind — wrapping up my undergraduate thesis, final examinations, graduating from college, moving to a new home & starting my first real job at Google! More on all of this in future blog posts but in between all of the adult-ing, I also traveled to eastern Europe with a few friends from university for our grad trip!

After a grueling 12 hour flight from Singapore, Athens was the first stop on our grad trip and my first taste of Europe (quite literally, given how many gyros platters I ate). There were some very pleasant surprises in Athens — surreal street art, unbelievably great service and the friendliest people!

The next day, we got up early and started the day with a glass of freddo cappuccino and a breakfast pretzel. After a quick stop at the Ancient Agoda, we made our way to Exarcheia, an edgy alternative part of Athens with a vast collection of street art. We ended our day with dinner at A Little Taste of Home in Gazi, where the waiter treated us to a shot of mastika, another local liquor. 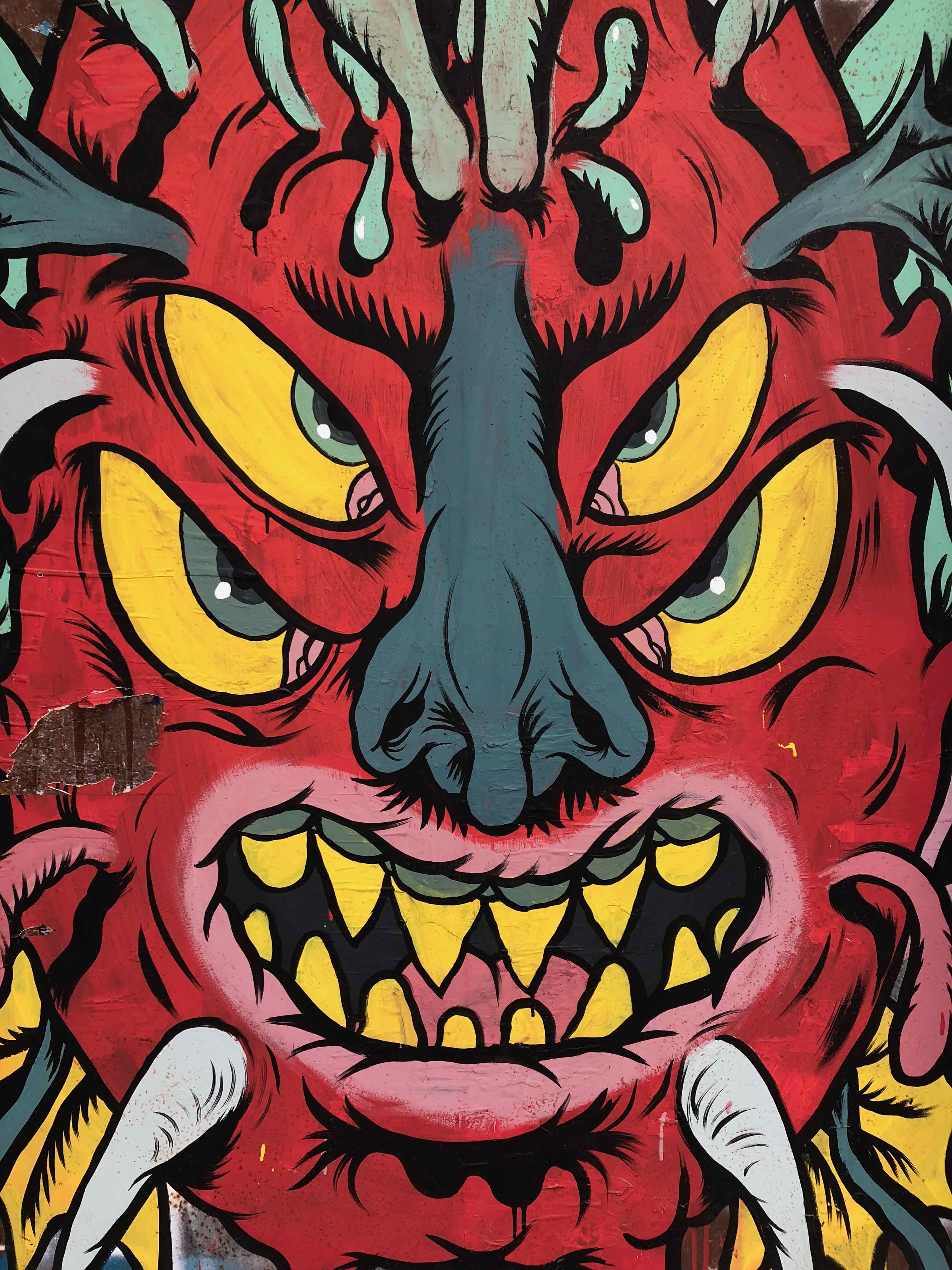 After a couple days in Athens, we hopped on a ferry to Mykonos, part of the world-famous Cyclades group of Greek islands. The island is as picturesque in real-life as it is in postcards and the splashes of blue and white make for remarkably beautiful scenes! The island is extremely paradoxical, with the peaceful lanes and pristine beaches coming to life with house music and bright lights as the sun sets.

We spent most of our daytime in Mykonos town mindlessly strolling through the streets, stopping only for some delicious Jimmy’s Gyros and photographs. It was incredibly serene, despite the island’s population increasing ten-fold during the tourist season. 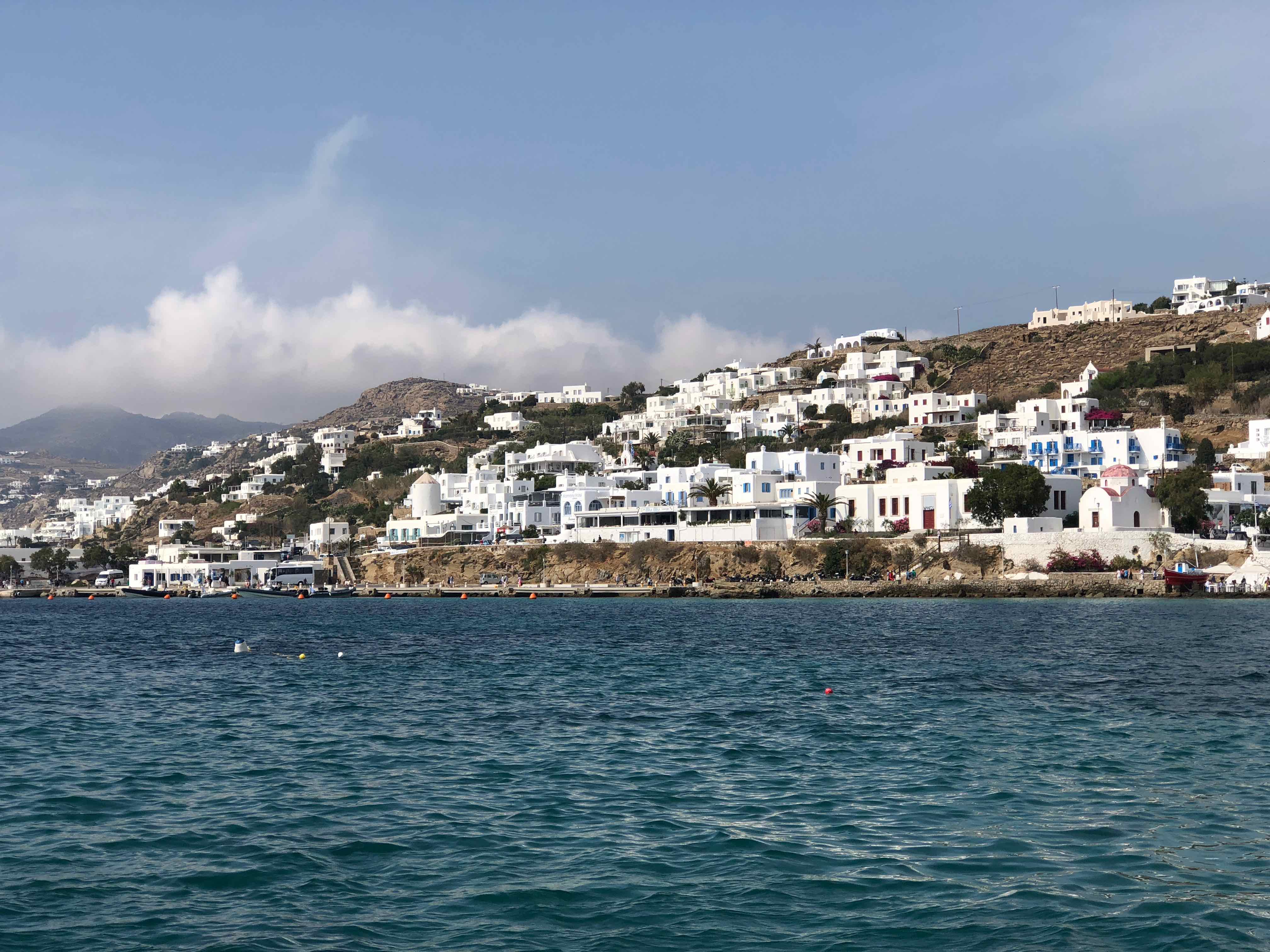 On our second and last day in Mykonos, we took a bus to Paraga and hiked through breathtaking seaside cliffs to get to Paradise Beach, where we relaxed, got some reading in, swam in the Aegean sea and danced to great music at Tropicana. Oh, and they serve amazing €5 gyros that tasted even better after hours of dancing! 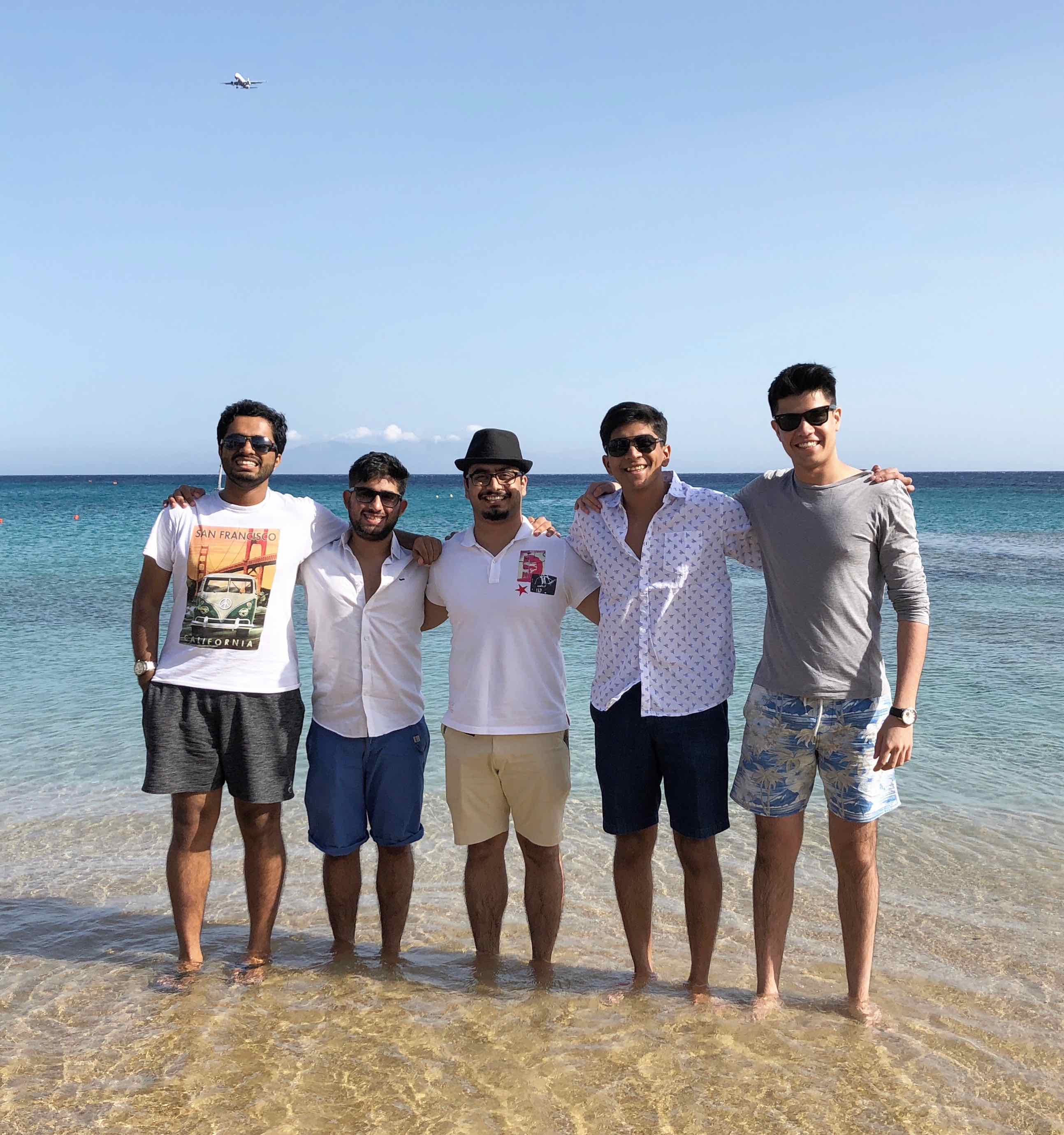 The next stop on our grad trip was Prague, which is everything you expect from a quintessential eastern European city and some. I couldn’t stop clicking photographs of the nearly symmetrical streets with colorful buildings on either side and this was just on the way to our AirBnB! 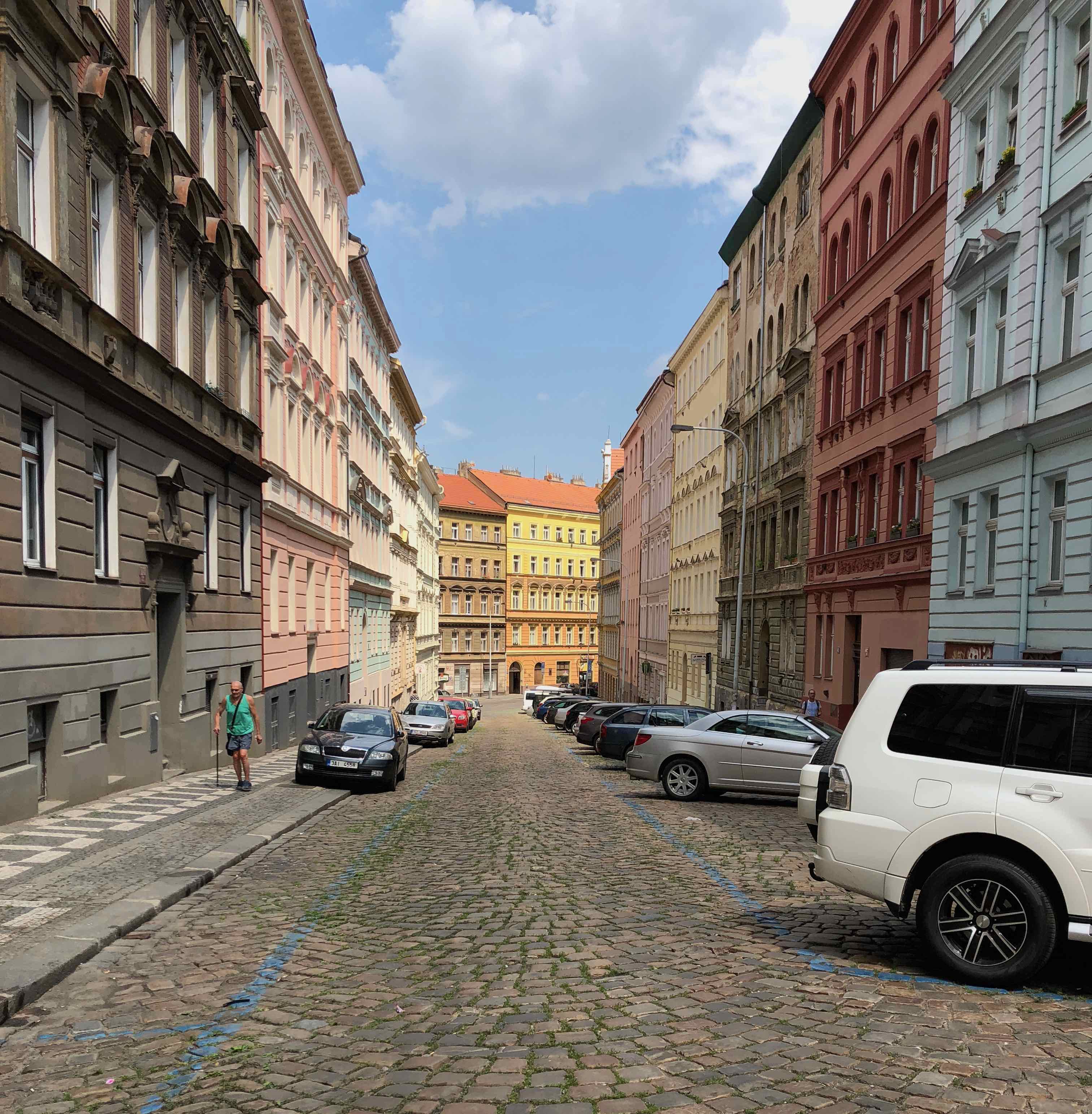 We started our stay in Prague by exploring the Old Town area, which truly represents the dichotomy of Prague — carefully preserved historical buildings that are now leased to luxury brands, pubs and Hooters. You’ll find study groups touring the main square, attentively listening to their tour guide explaining the history of the city while groups of men in full costume on their stag do walk past. There’s also an abundance of talented street performers and musical artists scattered across the town that make you truly fall in love with the city. Of course, the deliciously sweet chimney cake and cheap beer helps too! 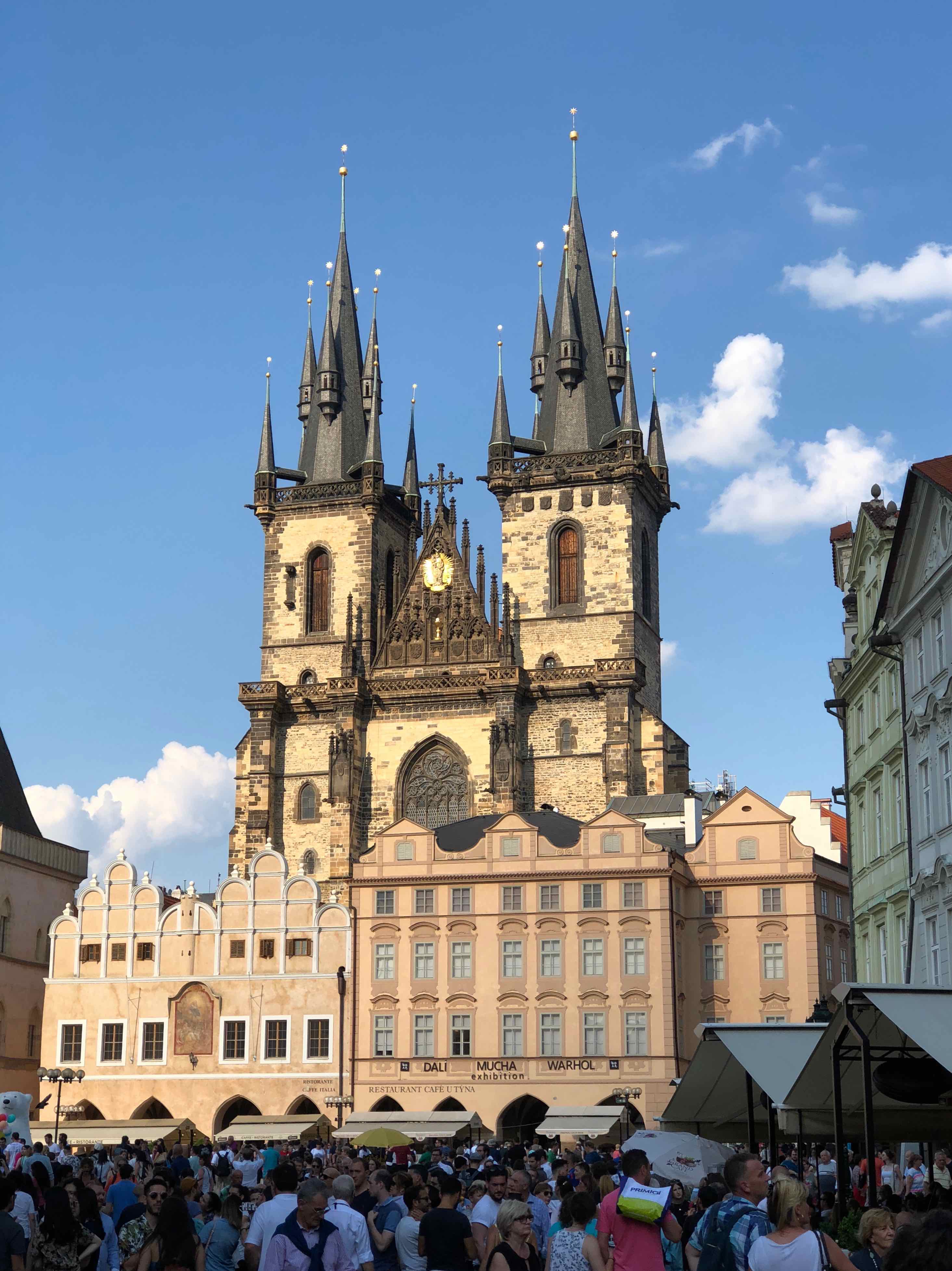 Church of Our Lady before Týn on Old Town Square

A pleasant surprise was the Apple Museum, which is an exhibition of an anonymous private collection of Apple products since the company’s inception. If you’re a fan of Steve Jobs or Apple, the museum serves almost as a pilgrimage through the company’s history and the founder’s mind. It is also one of the few offline places that accept cryptocurrency as payment! 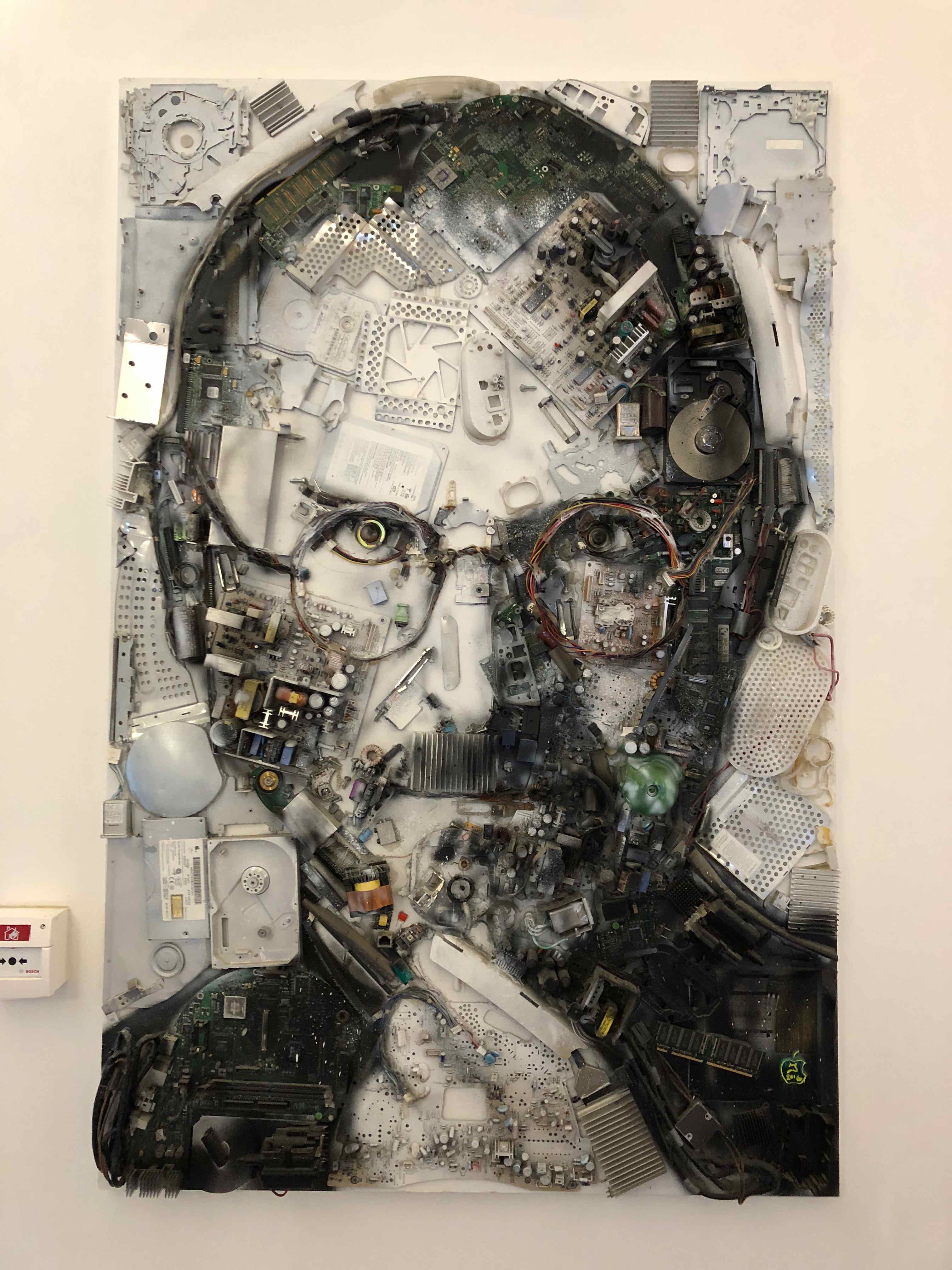 Portrait of Steve Jobs (made out of old computer parts)

Since we were in the beer capital of the world, we went on a beer tour where we tried several different local beers at bars that were centuries old and learned about the process of brewing beer at a microbrewery. We were even awarded “Beer Diploma” certificates at the end of the tour! Though, I think it’s fair to say none of us can still tell the different between an ale and a lager. Another great stop for beer aficionados is BeerGeek, a popular local watering hole that boasts an immensely large collection of international beers. 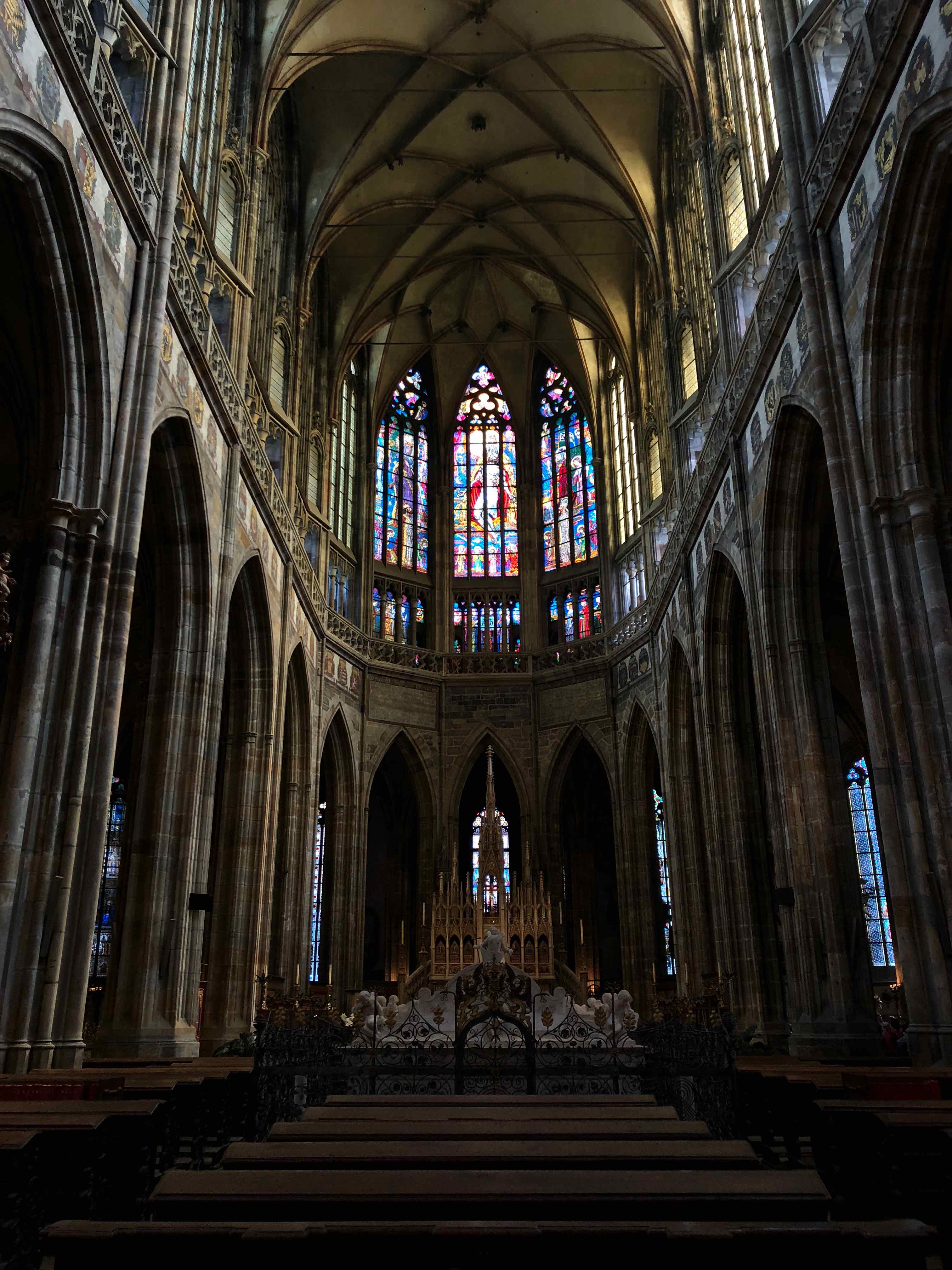 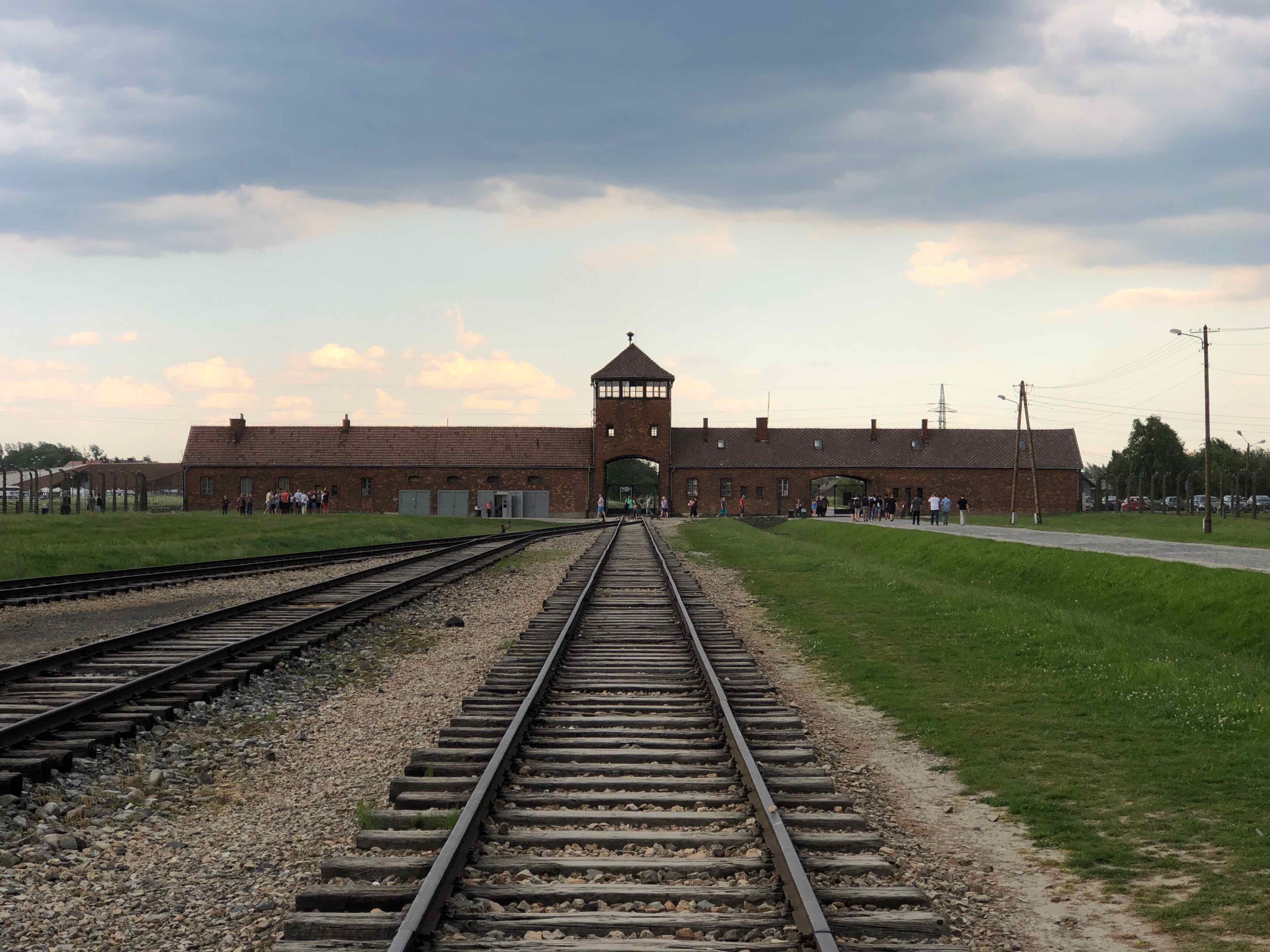 A trip to eastern Europe would not be complete without paying our respects at Auschwitz. We traveled there as part of a day tour and the experience, though brief, was incredibly moving and deeply personal. The museum has been very well-preserved and serves as a haunting reminder of the atrocities mankind is capable of when fascism, ignorance and hatred is allowed to proliferate without restraint.

Our last stop in the Czech Republic was the quaint town of Český Krumlov. It hosts a UNESCO-listed castle complex and scenic garden landscapes. Unfortunately, it rained while we were there which prompted most of the tourist sites to close down. However, walking through the narrow lanes of this unspoiled town allows you to travel back in time and admire the sheer beauty of the postcard-like architecture around you. 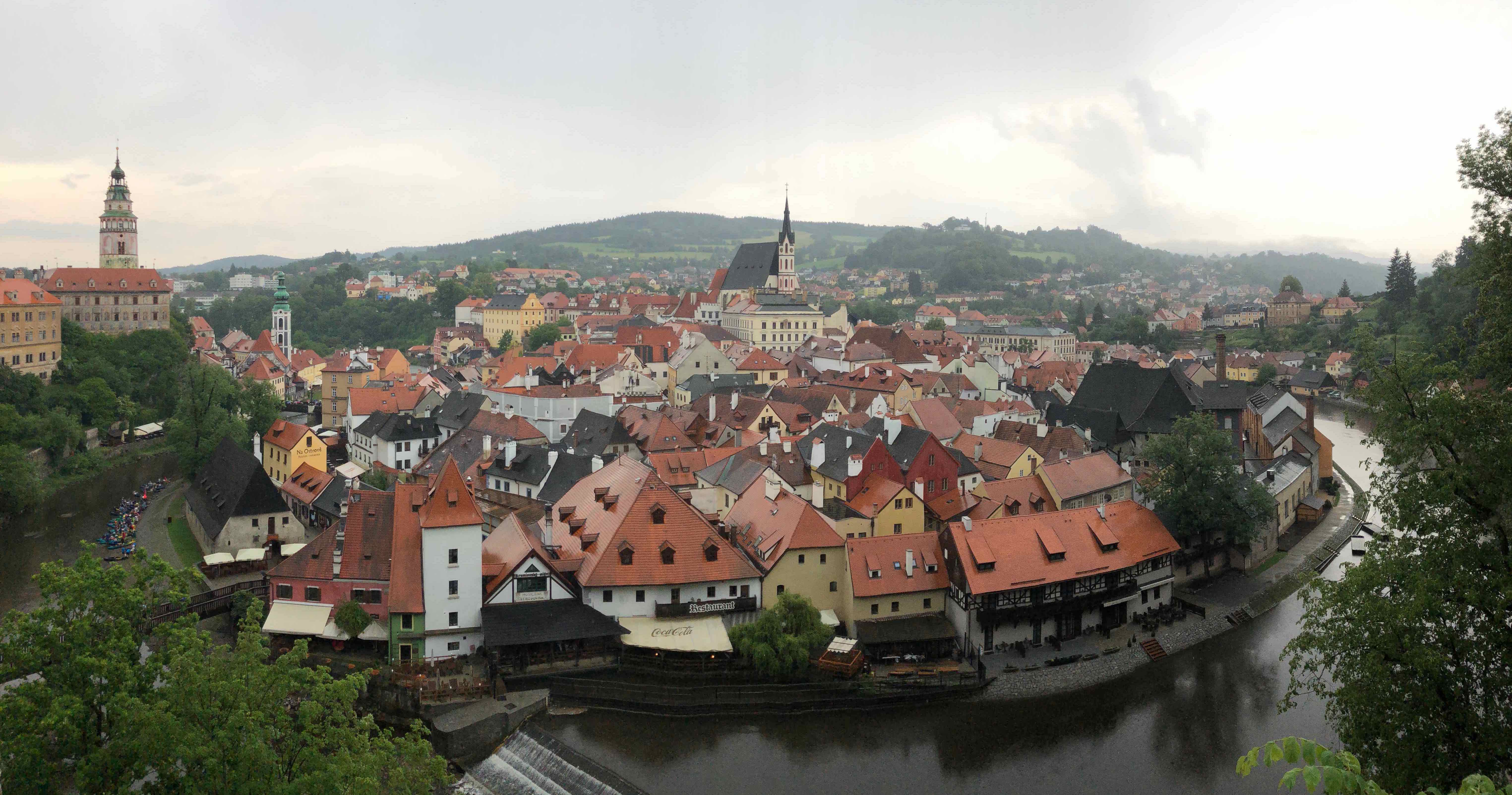 In our last few hours in Prague, we forgot we had to leave the town we had fallen in love with and ended up running across a busy highway with our luggage (in hindsight, probably not the best idea) to catch our bus to Vienna. We had less than 24 hours in Vienna but we managed to cover most of the major sights and end the day chilling by the Danube river.

The first item on our packed itinerary was Schönbrunn Palace, whose palace tour exhibited the tremendous opulence of the royal family as we moved from room to room, admiring the art and luxurious furniture. The palace grounds were just as beautiful with fountains and well-maintained landscapes on either side of the path. 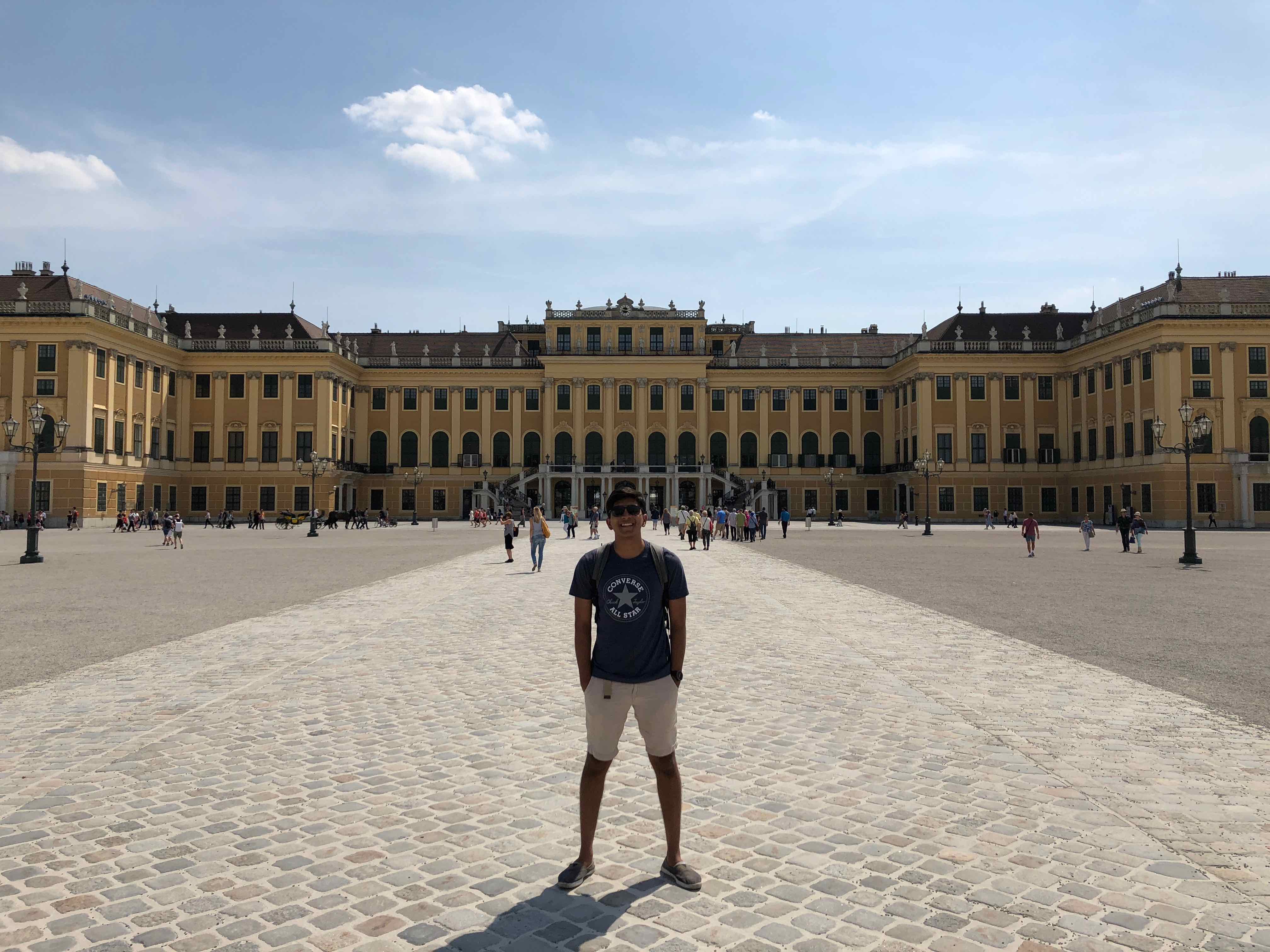 From there, we made our way to the Hundertwasserhaus, an apartment building inspired by funky, contemporary architecture and in stark contrast with the surrounding beige buildings. The building stands out with its use of bright paints and climbing plants and has become part of Austria’s cultural heritage. After a quick coffee break, we wrapped up our tour by visiting The Hofburg, City Hall and the Parliament building. 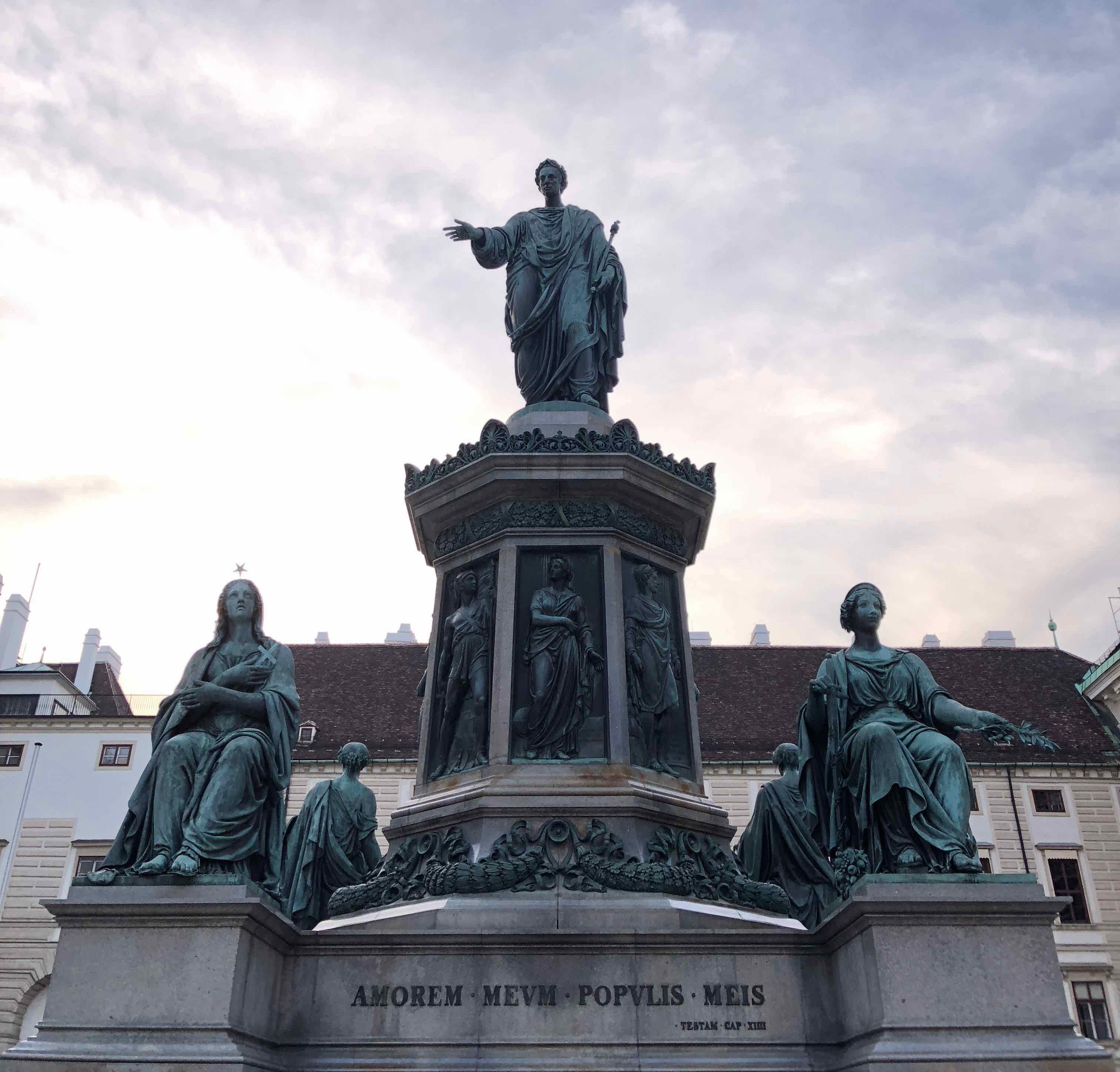 A Statue on The Hofburg Grounds

The last stop on our trip was in my city of choice, Budapest! A combination of two towns, Buda and Pest, with the Danube river going through the middle, it has become one of my favorite cities in the world with its rich history, wide variety of cafés and restaurants, outdoor spas, friendly locals and an impressive nightlife!

We started our first day in Budapest by eating at a medieval-themed restaurant, Sir Lancelot, which was not worth the hype but did introduce us to the local food. Next, we walked down the Danube river on the Pest side, visiting the Hungarian Parliament building, St. Stephen’s Basilica, Liberty Square and the Chain Bridge. The Hungarian Parliament building, in all of its Gothic glory stands tall on the riverbank and provides quite a treat for the eyes as the sun sets! We sat across the building on the Buda side of the river and watched the sun set as the lights of the city came to life. Once the sun set, we made our way to Bors Gasztrobar and Szimpla Kert for some good food and great vibes. 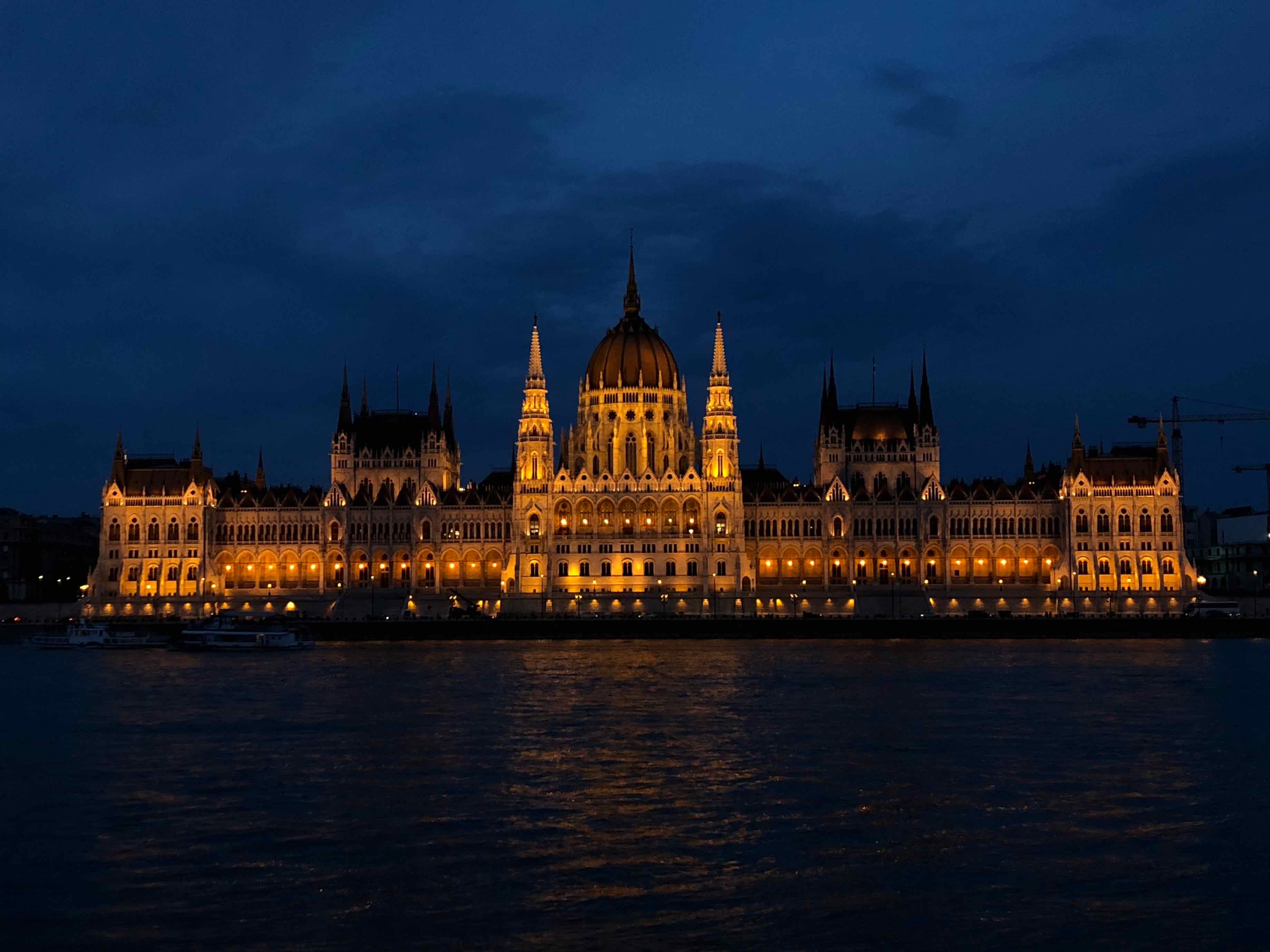 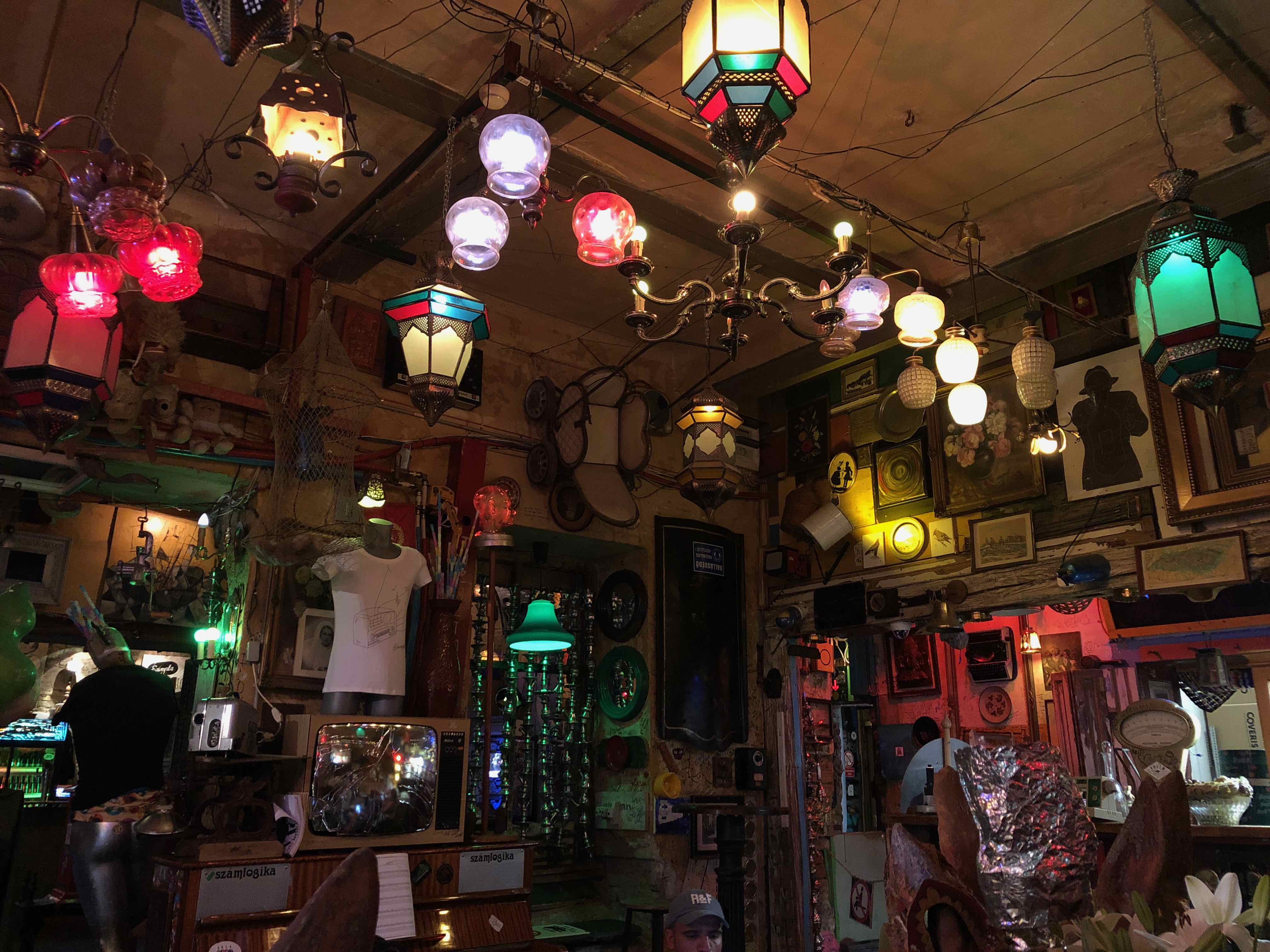 Interior of one of the rooms in Szimpla Kert!

The highlight of the second day was renting Segways and doing a tour of Buda Castle and the Fisherman’s Bastion on them. This was a really fun way to see the sights and also enabled us to zip through the crowds. We ate lunch at the For Sale Pub, which is a themed restaurant that has a bucket of peanuts at every table and the floor is covered in peanut shells! Right after lunch, we visited the Széchenyi Spa for a relaxing thermal bath followed by a scenic walk down Andrassy Avenue from Heroes Square where we spotted a double rainbow! 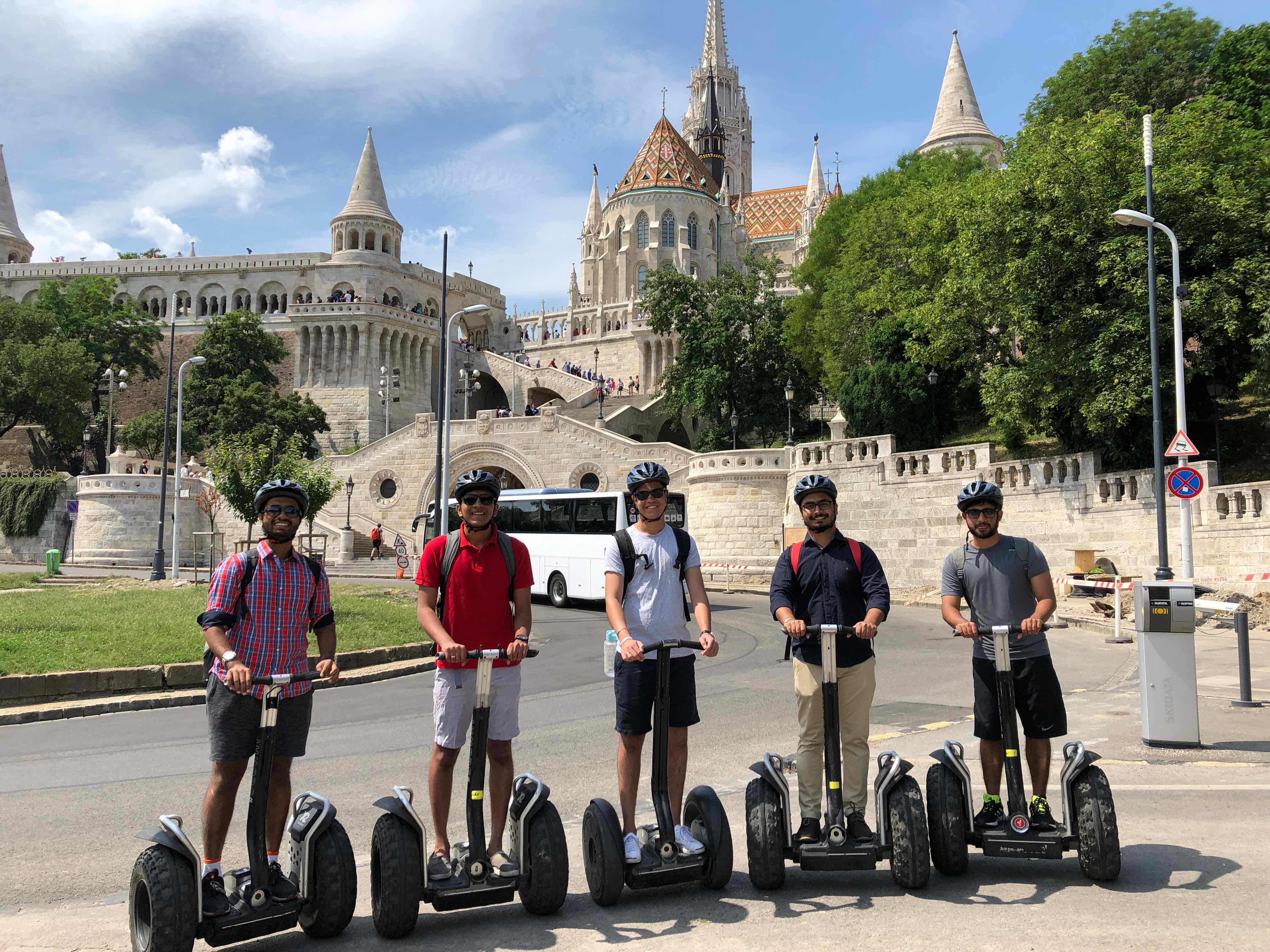 We also spent a day walking around the Castle District to catch the changing of the guards at Sandor Palace and visit the Hospital in the Rock, a WWII-era hospital built inside a network of caves.

Even though we just spent a few hours at Helsinki airport waiting for our flight back home, Helsinki has etched itself into my memory when it surprised us with a bright day sun as we landed at 10:30 PM! As someone who has spent most of their life at the equator, this completely baffled my mind and has intrigued me to visit the Scandinavian countries very soon! 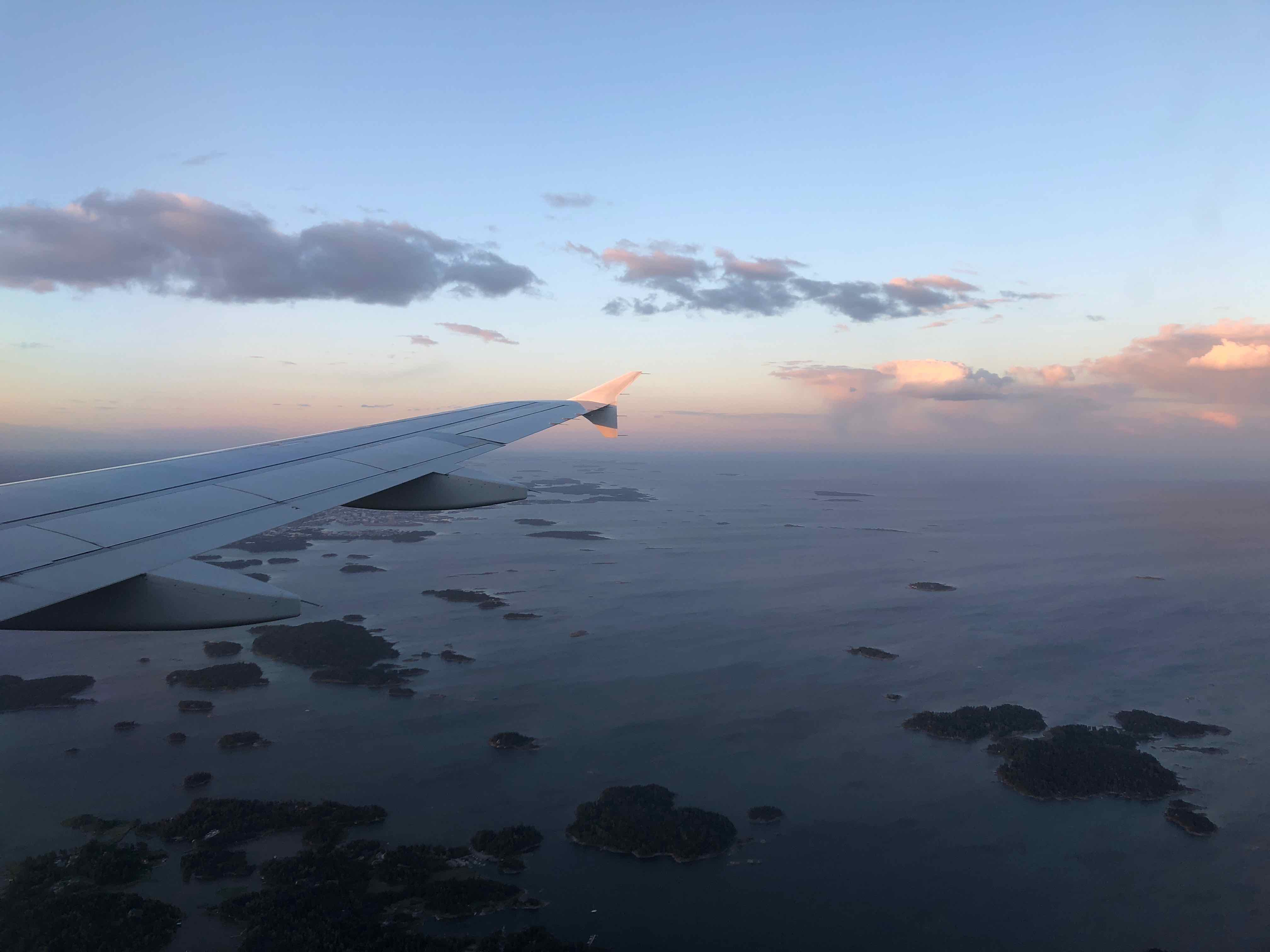 I made a thing!

Inspired by Casey Neistat’s adaptation of this video from 2008, I made a video of myself running across eastern Europe in the same style! Shoutout to Bobby & Akash for patiently helping me film this!